Before I go on vacation I am always full of ambitious plans for the travel journal I will make. But then often right before my trip starts I change it all around and go for something simple instead.

My trip to Texel was no different. Ahead of time I was planning on bringing a lot of supplies and even my tiny Selphy printer so I could print my photographs while I was there. It was going to be fantastic!

In the end all I took was a small tote with a bunch of black pens, a waterbrush, a glue roller and some scissors. Oh yes, and a journal of course: 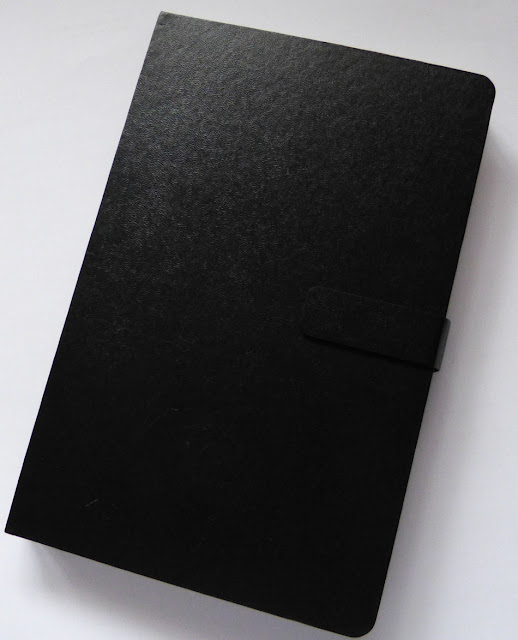 I decided on a Canson Art Book 180. I had previously used a book with the same type of  paper for a regular journal and I fell in love with that paper. It is not really thick and there's a lot of ghosting going on, but nothing bleeds through and it can take a lot of wet media without going to pieces. I also love how the paper sounds after it has been wetted. It's hard to explain, but there's a crinkly sound to it that is absolutely irresistible.  know, I'm weird.

In this post and the next I will give you a peek in this travel journal, which I (original and inventive as always) named The Texel Book (Het Texel Boek).

As you will see the entire book is done in black and white, except for the little ephemera you pick up during a trip. I did a lot of simple letter drawings and even some sketching here and there. For the sketching I used watersoluble pens that I wetted with  the waterbrush, which with a certain fineliner often gave a purple effect that I really liked.

Of course I also did a lot of writing. I'm only showing you the spreads with some visual elements to them, but just so you know, there are a ton of spreads with only writing and things like bus tickets and tea packaging on them. ;-)

Let's have a look, shall we? 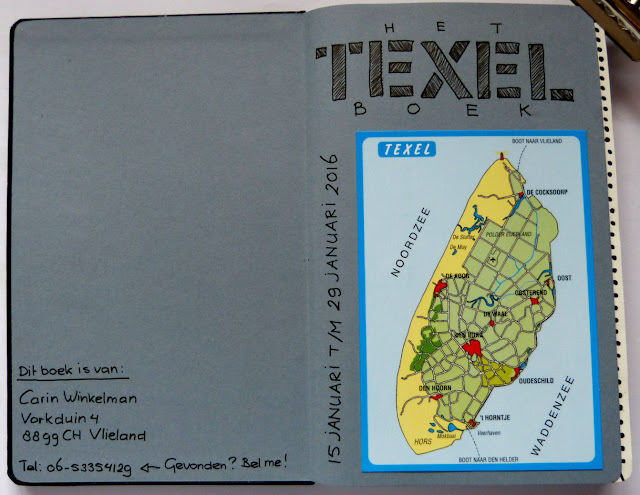 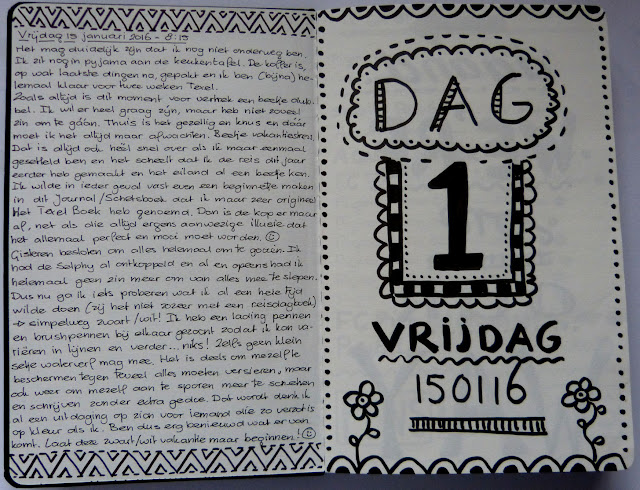 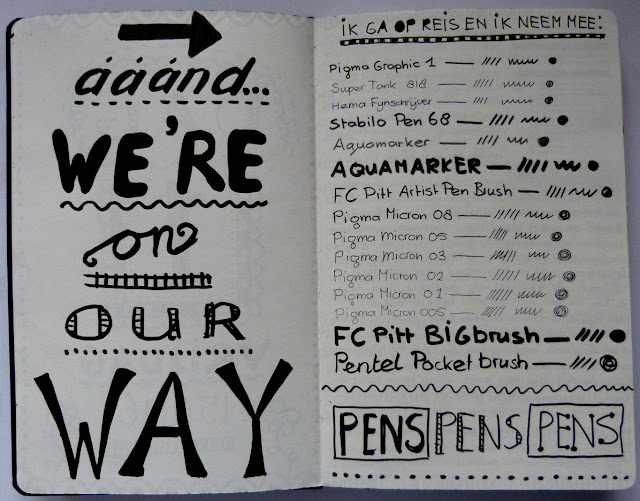 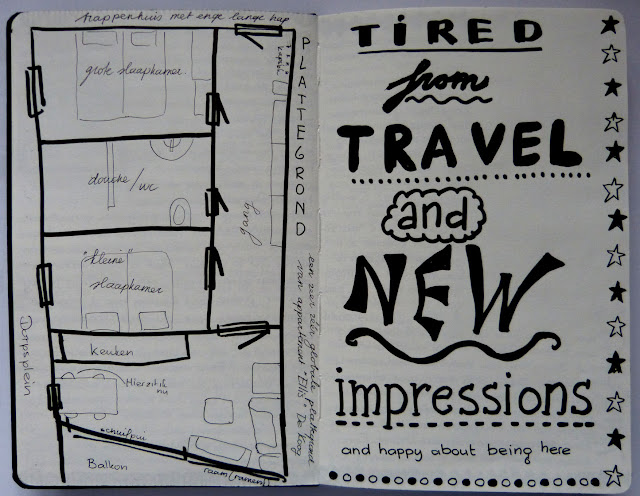 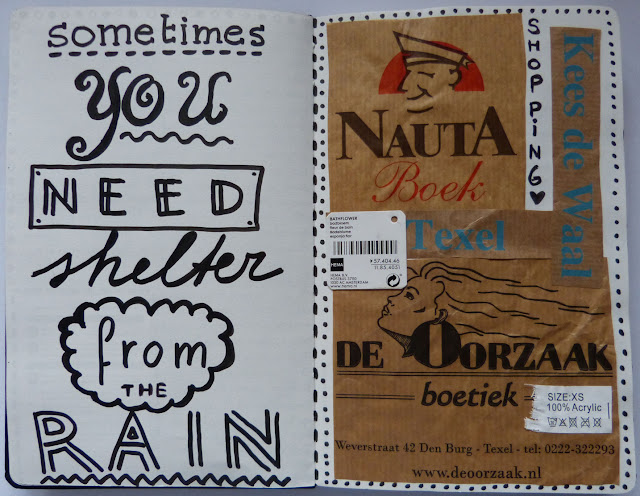 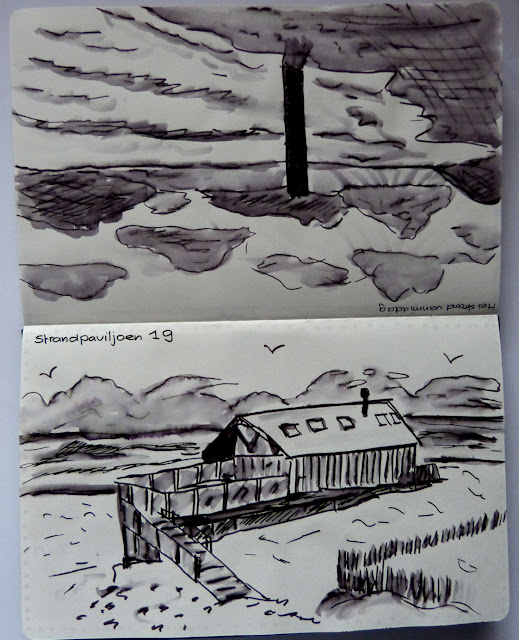 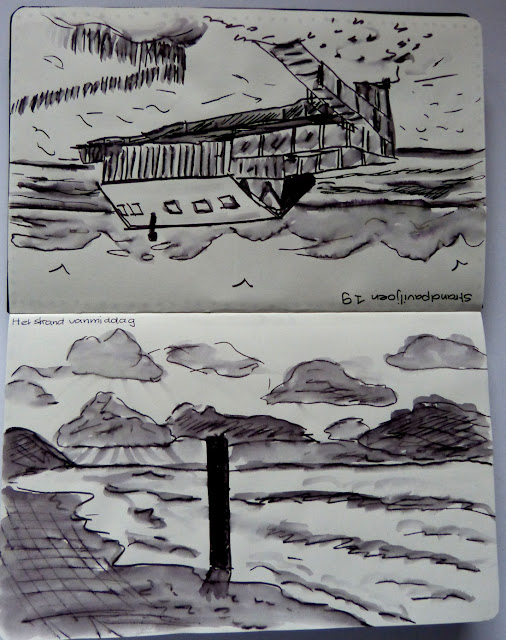 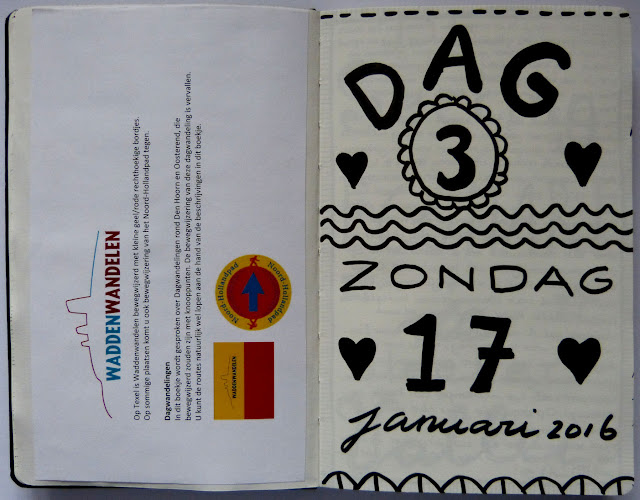 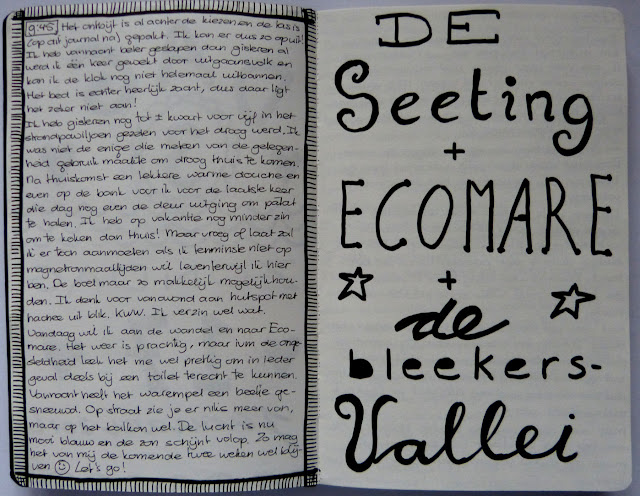 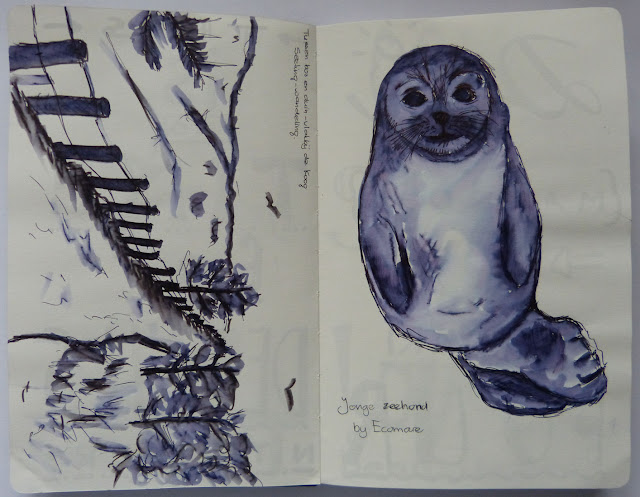 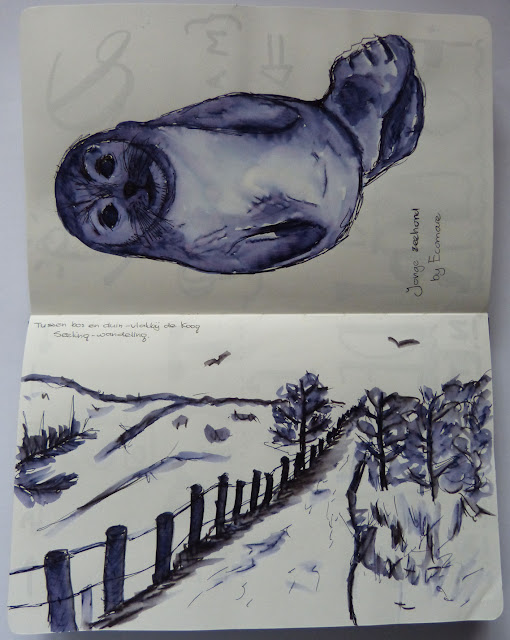 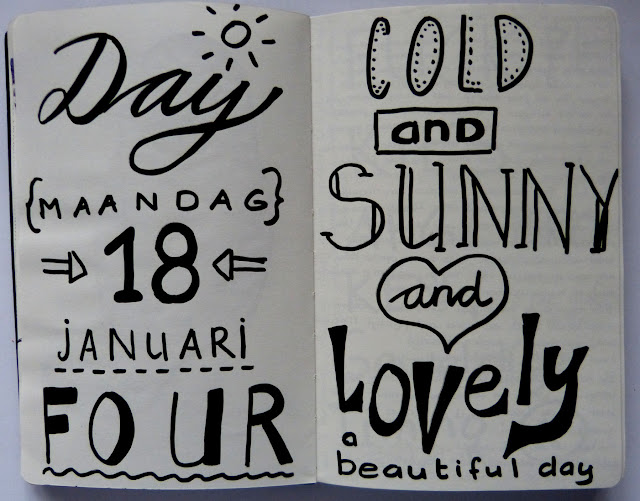 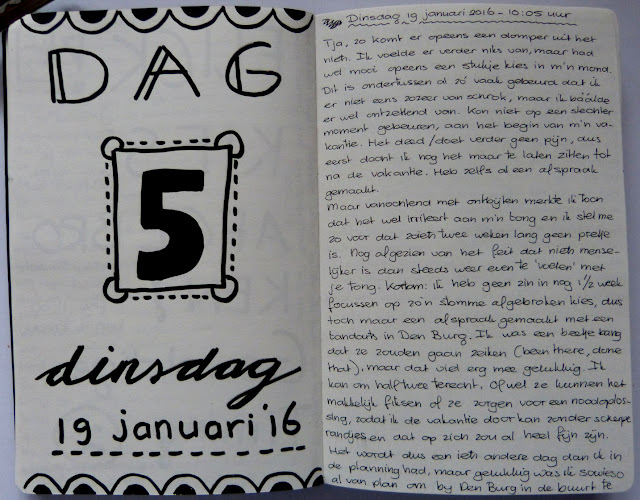 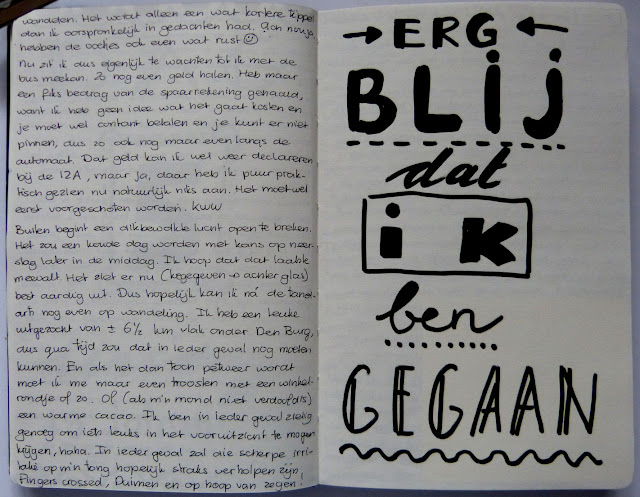 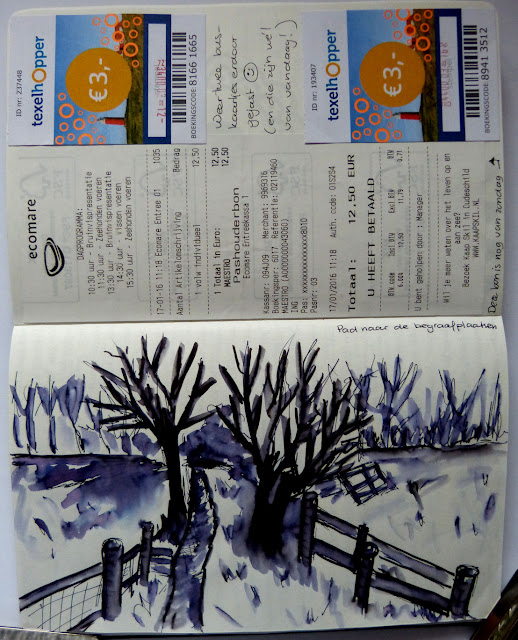 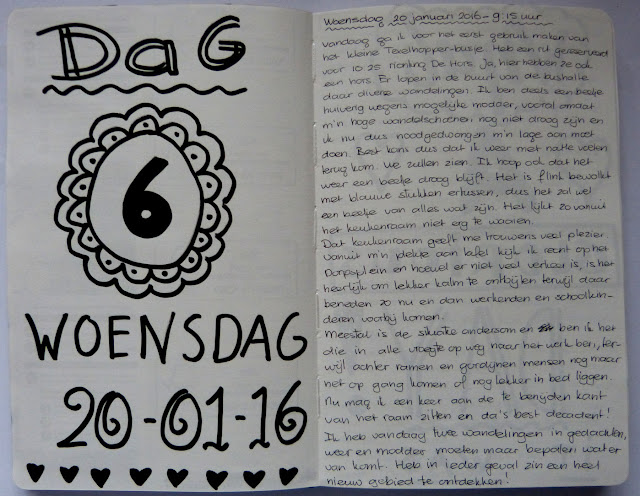 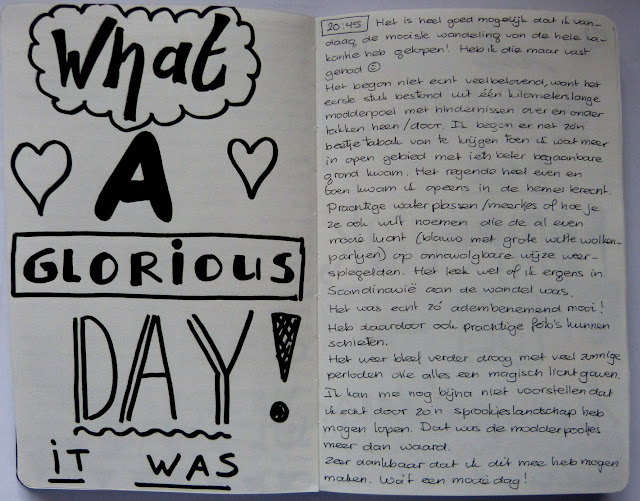 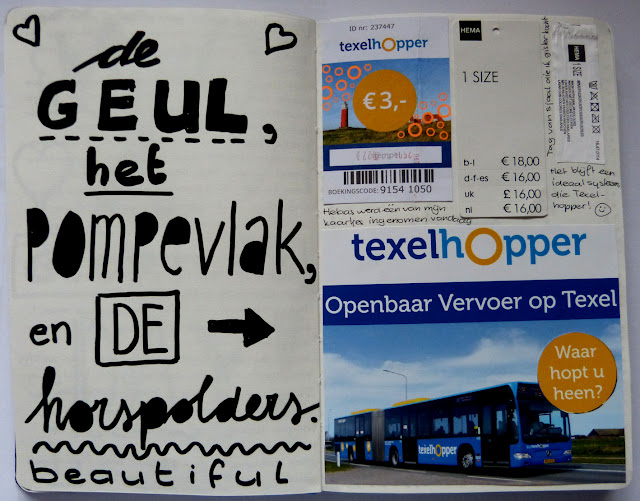 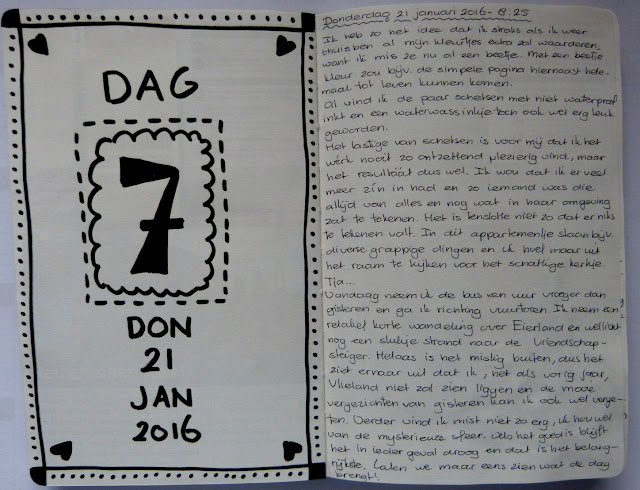 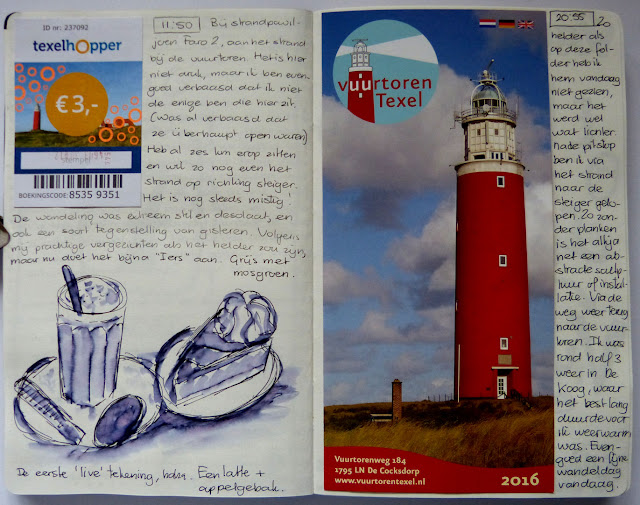 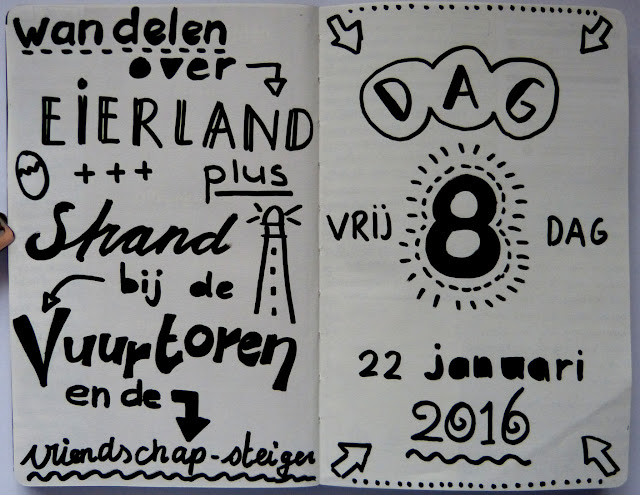 As you can see some of my letter drawings are in English and some in Dutch and some both. There's absolutely no rhyme or reason to that. I just put down what's in my head. Most of them are simply announcements of what day it is or things I did that day.

As for the sketches, I did most of those at night back in my apartment after photographs I had taken that day. The only one I did 'live' in the above ones is the  one of the apple pie and coffee. I've said it before: I'm a comfort sketcher. I take very little pleasure in standing in the cold and wind outside trying to sketch a scenery. I'd rather walk and take it all in and then sketch behind a table sitting on a comfortable chair.

Well, that's the first part of my travel journal. Second part next post.