It's a very (very) slow process, but I am gradually filling up a sketchbook with beautiful ladies in beautiful dresses. You may remember this project of mine. I use a wedding magazine as reference for poses and dresses and then I just go about my own way in drawing a lady in a beautiful dress. It's my way of practicing a full length clothed figure. They never come out as wedding dresses though. Here's my latest:


The piece was done in watercolour and drawing pen with some added collage. I like the way the folds in the dress came out and I love the colour of it. The background I totally made up and I added some flowers that I cut from the wallpaper my coworker gifted me. It ads a nice touch I think.

The background is part of the fun of these ladies, as is the choosing of different materials and techniques. And of course making an image in a magazine your own is fun too. I altered the dress not only in colour, but also in design. It's like playing dress up and make believe with your own drawings. ;-)

Hope you liked looking at this new lady and wish you all a wonderful and artsy week!
Geplaatst door Carin Winkelman op July 30, 2013
Email ThisBlogThis!Share to TwitterShare to FacebookShare to Pinterest
Labels: drawing, sketchbook, watercolor

From the White Book

High time I showed some journal pages again from my daily journal.

My White Book is being worked in regularly on my days off and I allow myself to leave it aside on my working days. So I don't  really journal every day anymore, but it's okay. I do still enjoy the process and I do keep writing and filling spreads and that's the most important thing. 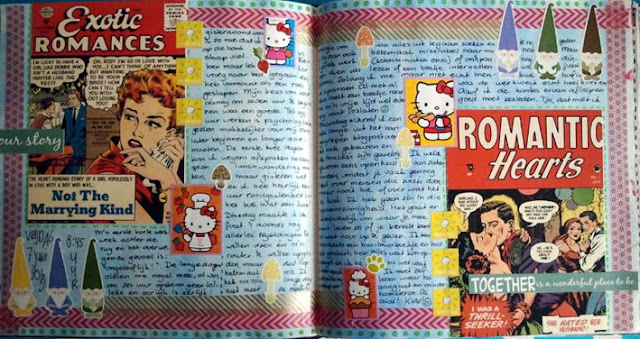 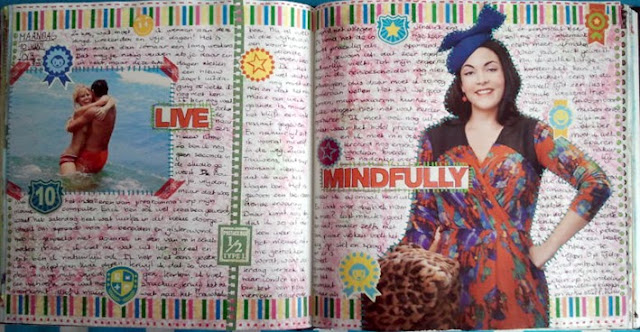 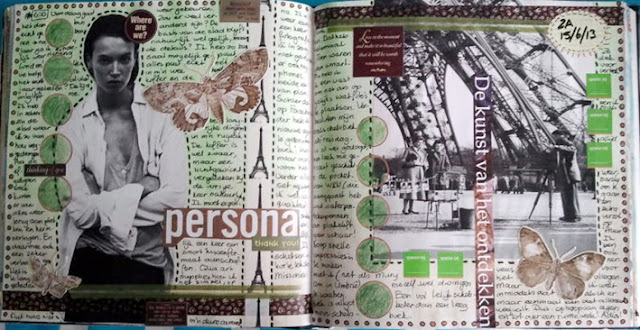 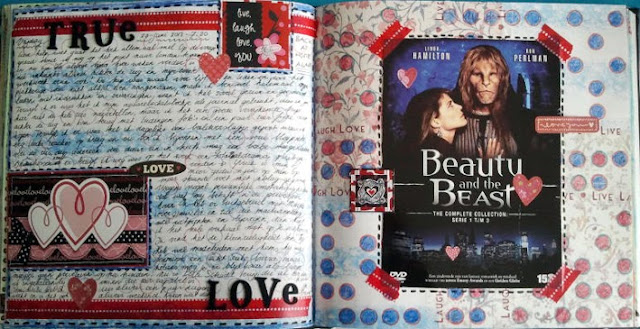 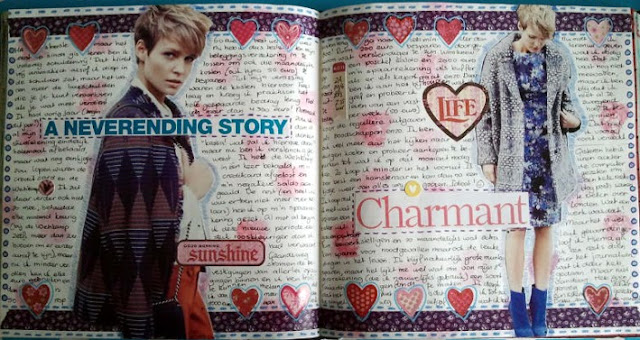 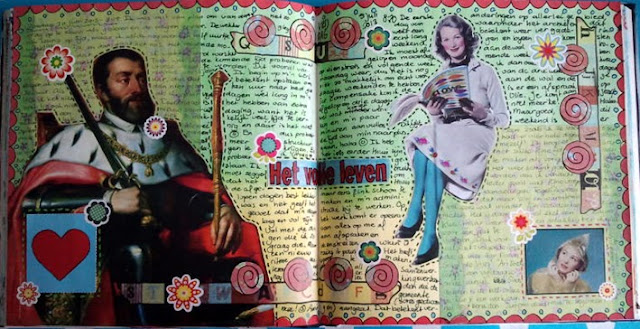 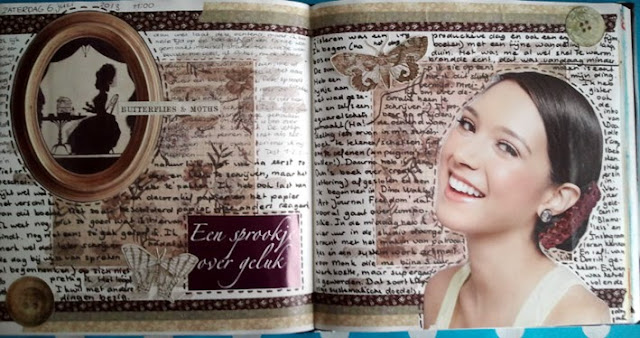 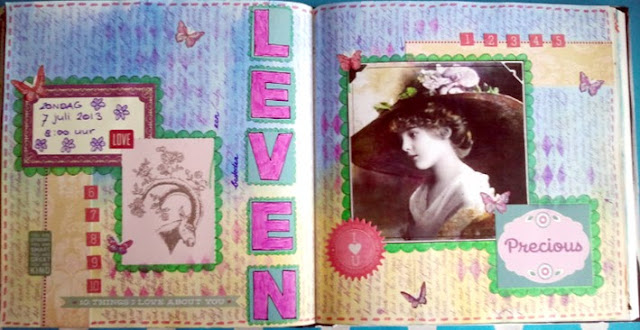 This journal has a lot of pages. I think I'm about a little over half way through now. I am already thinking about what will come after this though. I have my heart set on an altered book again, but I haven't really decided yet. I do feel the draw of prepping a book for journaling though, so that's a telling sign. I have some likely candidates laying ready for this purpose so I can start any minute. Luckily I still have some time to think about it. ;-)

An old print and a poem (a little commission)

A few weeks ago a coworker came to me and asked me if I would do a little assignment for her. She had this picture of a very old print which depicted a bunch of clouds over a landscape and she had a poem by Goethe about different forms of clouds and what they mean. The original idea was to simply combine the two digitally into one picture, but the quality of the print was so abysmal (and it was stained quite a lot too) and the picture so small it was impossible to do that and still have something worthwhile to hang on your wall.

Since she knew I could paint a little she asked me if I would combine the old print and the text in a handpainted picture. Since the image was so old it was okay copyrightwise and it was also a little challenge to see if I could turn the little image into a bigger painting with words added to it. So to work I went.

My first try I did in watercolour and it looks like this:

The acrylic paper was my own, but she had also given me some paper to work with. It was good quality Arches paper, but not really suitable for watercolour. I did do a second one though as an extra challenge to myself and decided to do this one in gouache. I was right about the paper, it was very absorbant, so you could do like one stroke and it would just suck the water right out of your brush! ;-) But I persevered and here's the result of that attempt.

To both paintings I added the poem in handwriting with a drawing pen. This was pretty scary. One mistake and the whole thing would be ruined! Here's a sample:


And here they are side by side. The bigger one I taped to a drawing board so it would buckle less while I worked on it. That's why there's a white edge around it. 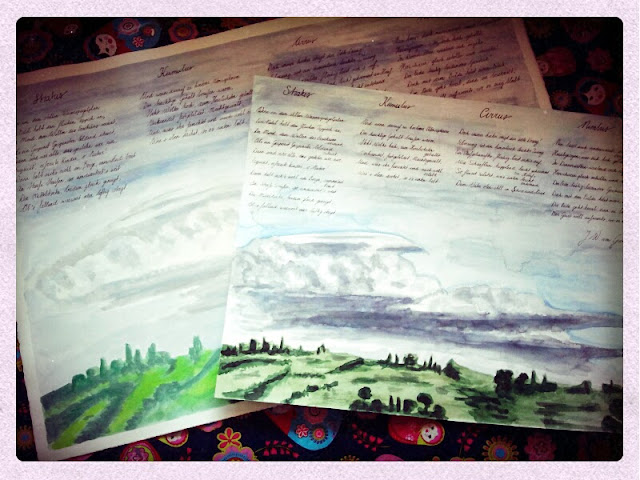 I'm pretty pleased with the result even though as I said the clouds gave me a serious headache. My coworker is happy too (thank God) and will pay me a nice fee for my art supply fund. ;-)

I don't really consider this art though. This is more craft than art. After all I'm just using other people's images and words and put them together to form a picture. It's copying really. If the image wasn't already that old and free of copyright,  I would not even have done it. But now it was a nice little challenge and a way to do something for my coworker that made her happy and get paid for the whole thing too, haha.

Wishing you all a wonderful and artsy Wednesday!

Pages from the watercolour sketchbook

The sketchbook I used for my London Journal was not originally intended for that purpose. It was supposed to be my new on-the-move sketchbook to replace the small square sketchbook, because that was getting more and more impractical (mostly because it was hard to keep the book open).

However now my London trip is over, the journal pages are done and I'm still left with a bunch of empty pages in the book, so I have decided to fill the rest up with watercolour sketches and play. I suppose the London Book now has a double purpose, but who cares? As long as I keep filling those pages and keep practicing my skills! ;-)

Here are some pages that I have done after I came back from London.

These sketches were all done either from life or from my own photographs. I'm not always comfortable sketching en plein air. Not so much because people can see me, but because I like to have some room to put my things down and not have my sketchbook be blown open by the wind over and over again. So when I say I'm not comfortable I mean that very literally. ;-) I prefer taking snapshots and than picking one after I come home from a walk and sketch in the comfort of my own home.

The picture of Peer obviously was done from a photograph. There's no way my assistant would ever sit still for me to pose for a painting like that. The only time you can sketch him from life is when he sleeps! I'm pretty proud of that painting though. I really struggled with it and was just about ready to throw in the towel, but I'm glad I stuck with it. I think I really got his expression down quite well.

I'm really enjoying sketching again on a regular basis and also practicing my watercolour skills. I love watercolour, but I have my challenges with it, so the practice is good and needed. ;-)

Wishing you all a wonderful and artsy week!

It's Photography Friday again! Time for another peek through the lens of my smart phone at what I encounter on a day to day basis. Enjoy!


And that's all I have this time around. Ha ha ha ha (insert sarcastic laughter here) that's the biggest lie ever. There were over 200 photo's on my phone, but I figured that might be too much even for you photography lovers. ;-) Everything in a little moderation, right? Do hope you like these continuing peeks through my eyes though, because I cannot stop taking snapshots of...well...everything.

Wishing you all a wonderful and artsy weekend, make it a good one!
Geplaatst door Carin Winkelman op July 19, 2013
Email ThisBlogThis!Share to TwitterShare to FacebookShare to Pinterest
Labels: photography, Vlieland

A while ago a coworker gifted me this: 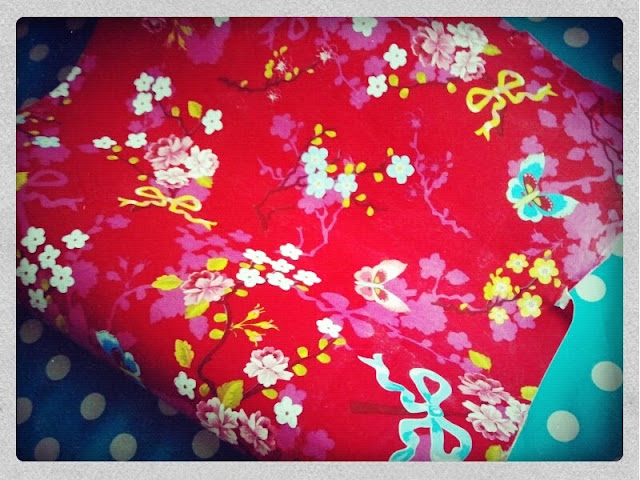 A whole roll of beautiful recycled wallpaper that she had removed from her walls. Because it's such strong material it is still in very good condition and she thought I might be able to use it for something artsy. Well duh! I was delighted with it, just look at the beautiful color and design!

So  recently I decided that the first thing I would do with it would be to make her a little gift. Of course being me it would have to be a handmade book. I decided on a one signature sketchbook with good Fabriano artist's paper inside and the wallpaper to cover the outside. Here's how it turned out:

I intend to make more books with this wallpaper. Lord knows I have a enough of the stuff for at least a couple of dozen. But the flowers and butterflies on it also make for beautiful collage elements, so nothing of this will go to waste. ;-)

After cutting the papers and coverpaper to size I had some left overs and decided to make another book with those. A little one this time and very simple indeed.

The second book is also bound with a ribbon. I have no idea what I will do with it yet or even if I will ever use it, but it was a fun little experiment to see how it would look. I really do enjoy making such simple little books. Hope you enjoyed having a look at them too.