On the south side of our town runs the Wadden Dyke (Waddendijk). It protects the town from the Wadden Sea coming in. Along the dyke are a lot of houses with their gardens pointing south and in these gardens every year Kunst aan de Dijk is organized. Kunst aan de Dijk literally means Art at the Dyke. It's like an open air exhibition where local artists show their work in people's gardens. It's a pretty cool concept.

This year I was asked to join and I said yes. At first I was a bit hesistant. Most of my art is done in books and I didn't feel I had that much to show, but going through my house I found out how wrong I was. I had plenty!

So last Saturday, which just happened to be the hottest day of the year so far, I took two big bags of paintings and some sketchbooks to my appointed garden and set up shop. It looked like this: 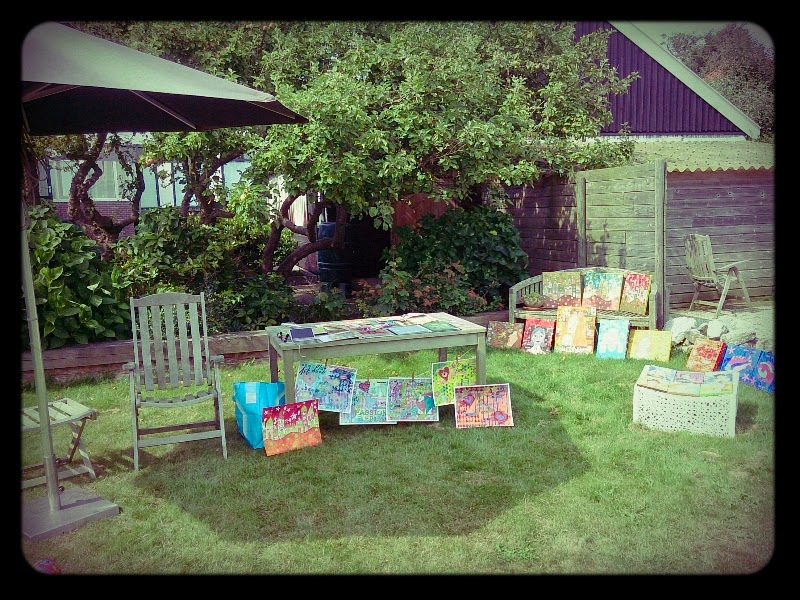 It turned out to be a most interesting and educational experience since, even though I've exhibited some things before, I've never really been around when people took in a bunch of my work.

I liked observing the people looking at my work. You could immediately tell if somebody liked it or found it interesting. Those that did not say anything, sort of avoided your eyes and were gone in no time obviously didn't care for it. But many took their time, asked lots of questions or talked to each other about what they saw. Only one woman was very tempted to buy a painting, but in the end unfortunately decided against it. I sort of understood that, when I go to things like this I am often tempted as well, but never buy. Buying art is not something you do a lot on a whim. Actually I haven't heard of any of the participants selling anything, it just wasn't that kind of event, but of course....it would have been nice. :-)

What I found surprising is that I didn't really care when people didn't like my work. I mean, I loved it when they did, but I didn't take any disinterest personally. Tastes differ. There's a lot of art I don't like or don't care for much. It's a thing you cannot change no matter what. I didn't get any really negative comments by the way, but body language can be very telling, haha. Anyway, I think it was good to find this out, that I actually stand behind my work. If somebody doesn't like it that's perfectly okay and I respect it, but I cannot do anything with it, because it's MY work, you know? I was rather happy to find out that I have grown enough artistic confidence over the years to go my own way and do my own thing.

I think the above is also the reason for my second surprise: I have a certain pride in my own work! Yes, I do see I still have a lot to learn and where existing paintings might be improved (which I never do, when it's done it's done forever), but this is a sample of what I've done so far and I want full credit for it.
So when someone came by, didn't seem al that impressed,  and then asked "Did X draw those girls?" first I was all "Huh?" (as in 'does this woman seriously think I would sit here presenting another person's work as my own?') and then I said rather firmly "No, I did!" (as in 'don't you dare assume I don't do my own art just because there are other people who also draw girls!'). I don't think it was meant all that condescending on her part as I'm making it sound now, but the fact that it came across that way says a lot about me and my relation to my art. It's MINE dammit! :-)

So all in all I learned something about myself I was not sure about and that is always a good thing. I enjoyed the experience and if possible will probably join again next year. The only thing I ask for is some cooler weather on that day, because 32 degrees celsius (90 F) is no fun when you are in a southside garden without even a breath of wind.

Have a good weekend all!