Over the past years I have been going back and forth between using paper planners, moleskine planners, my smart phone and just a simple notebook where I would write the dates myself as a base for writing down appointments and to do lists. The point was that I never could find the ideal format, because I want both a calendar and a lot of space for notes and such and preferably some art space too. But at the end of the year  when I was looking for a new year planner I finally came across what I think is the perfect solution. It's called a Midori Traveler's Notebook. It looks like this: 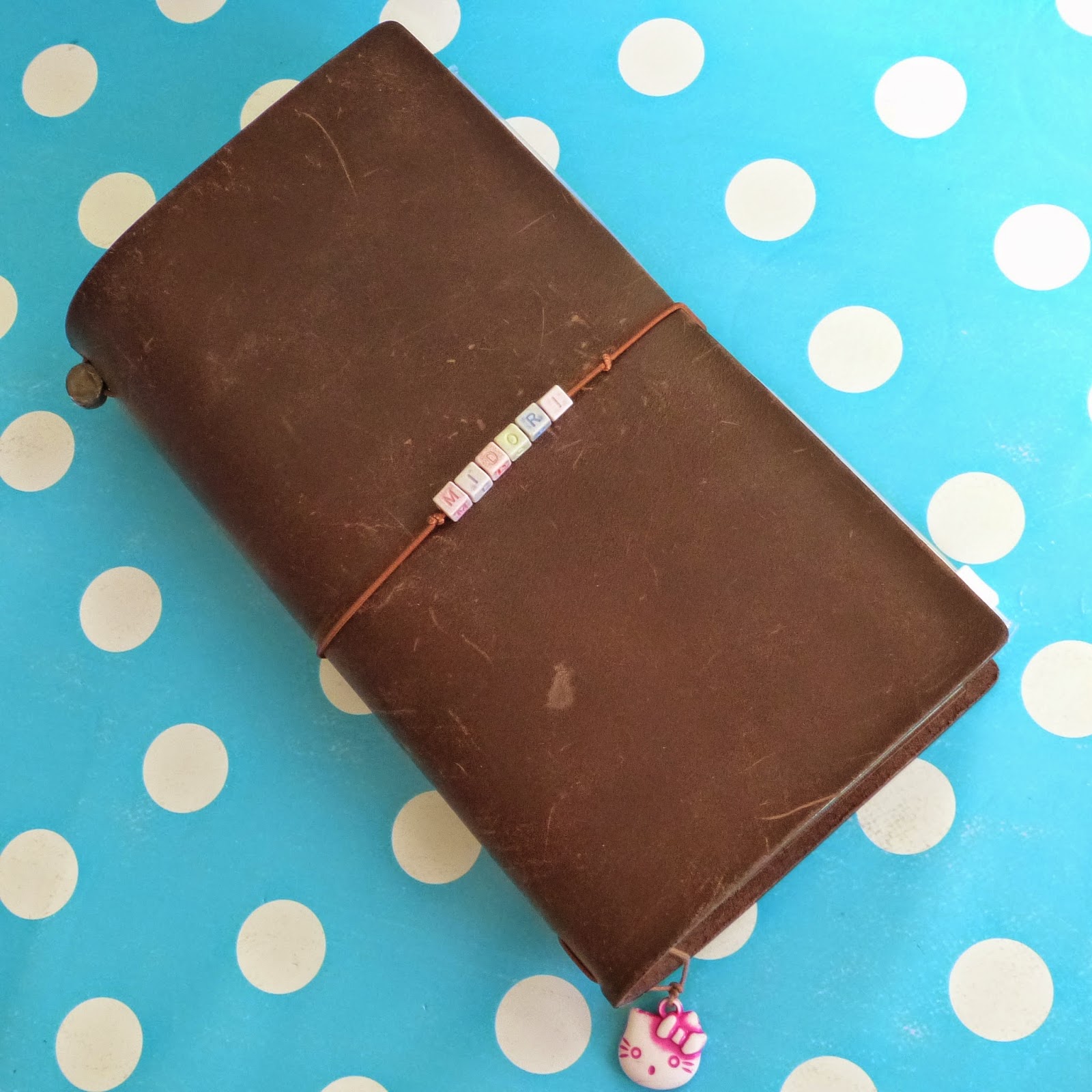 It's a Japanese notebook system (the company is called Midori) that is so simple that it's almost laughable. Basically you have a leather folder with a couple of elastics in which you can place different inserts. The cool part about this is that you can fill your notebook any way you want. 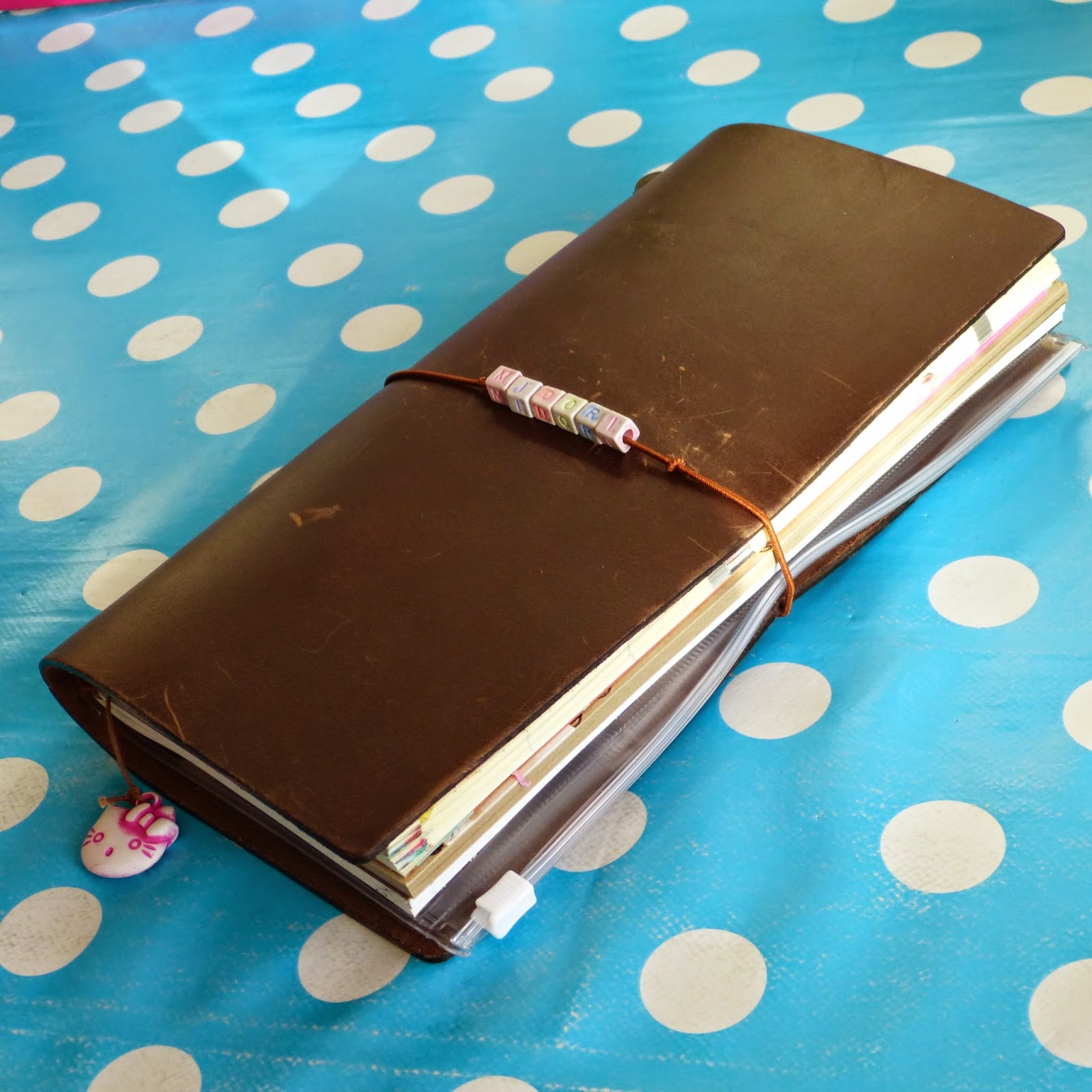 There's all sorts of 'official' inserts for sale that range from extra thin blank paper to preprinted calendars, but of course you could also make your own inserts if you so choose.

I fell in love with the size of it. It lays beautifully in your hand and yet is not small, but mostly I like the fact that you can personalize it by just putting in there what you need. I thought in this post I'd take you on a little tour through my Midori.

I added a Hello Kitty Charm to the bookmark and some letter beads to the elastic that holds the notebook closed. I wanted to spell 'CAATJE', but  unfortunately I did not have the right beads anymore (they were a remnant from another project), so I spelled 'MIDORI' instead. Oh well, I'm nothing if not original. ;-) 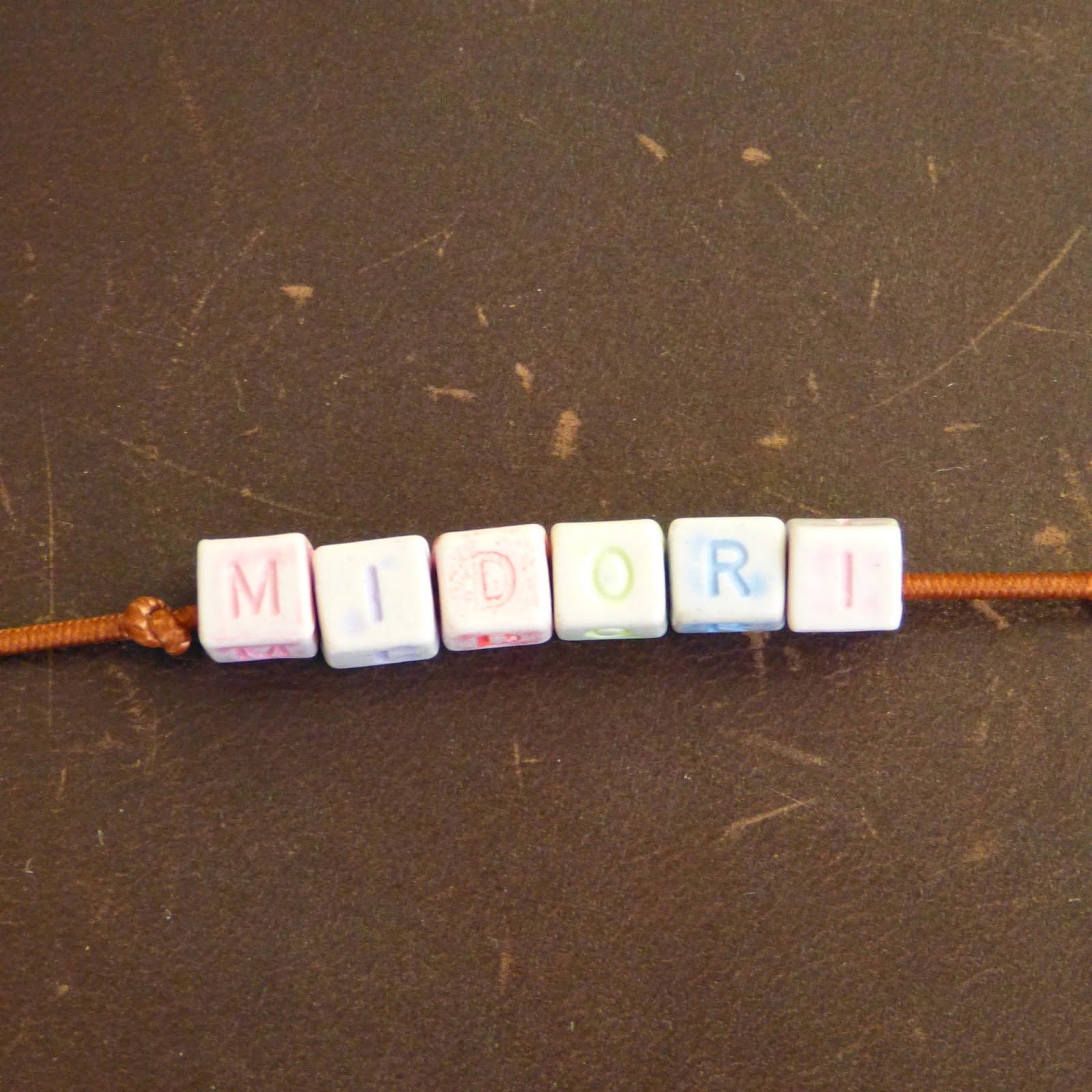 I put three notebooks into the folder and a so called plastic zip insert with several compartments. I also put in some sticky back plastic thingies (I have no idea what the English word is!) that can hold loose items. In the inside front cover and the front part of the zip lock insert I put a bunch of stickers. 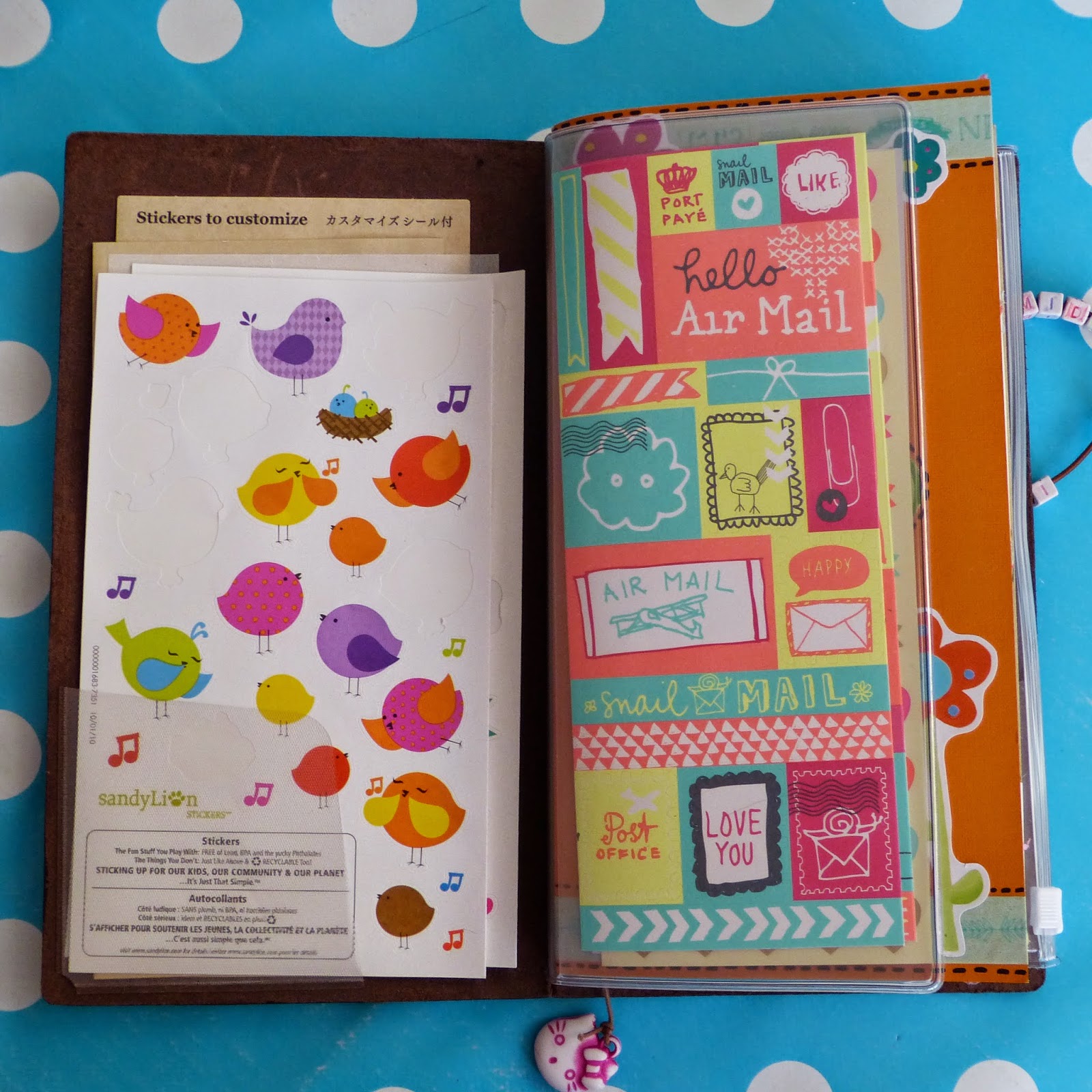 The first booklet/insert I have is a weekly calendar. I decorated it with stickers, tape and a marker. 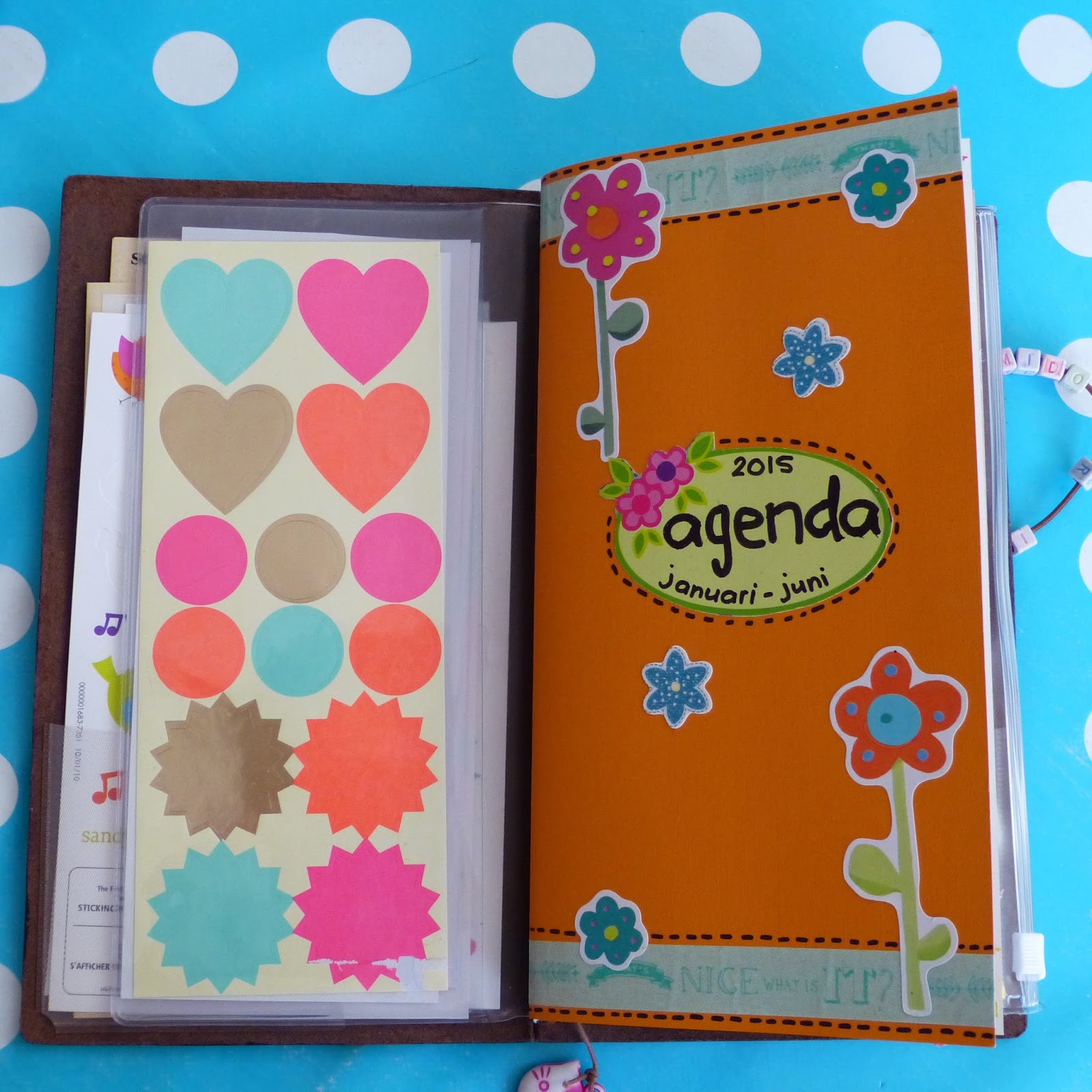 This is the inside front cover of the calendar, also decorated: 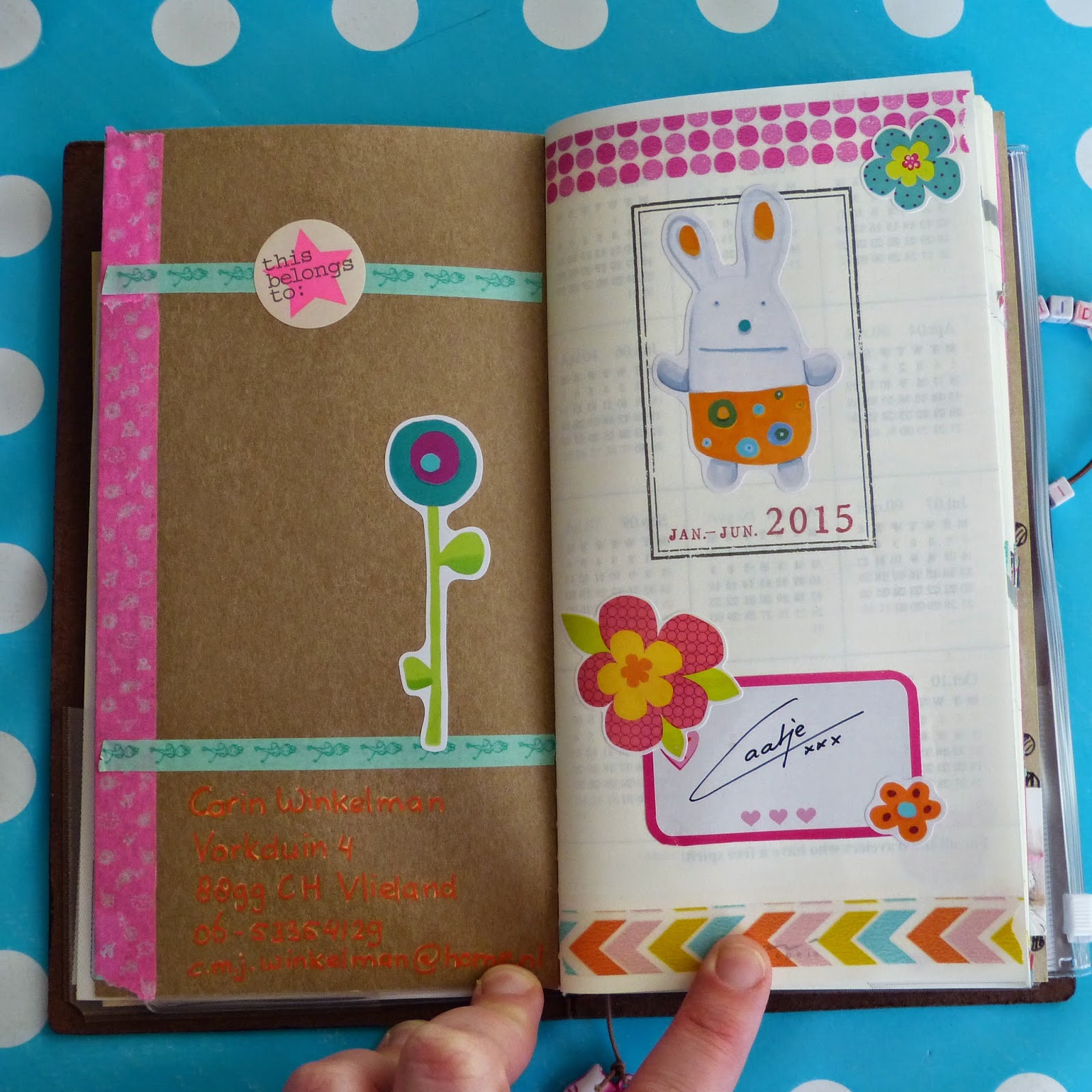 Here's a sample of a week gone by. I added tape and stickers to the original printed calendar. I put my to do lists and appointments in there. The green stars mean it's somebody's birthday. It just so happens that on the 5th of January I became the great aunt of an actual pair of twins! The pink thing on the top right is a magnetic bookmark. 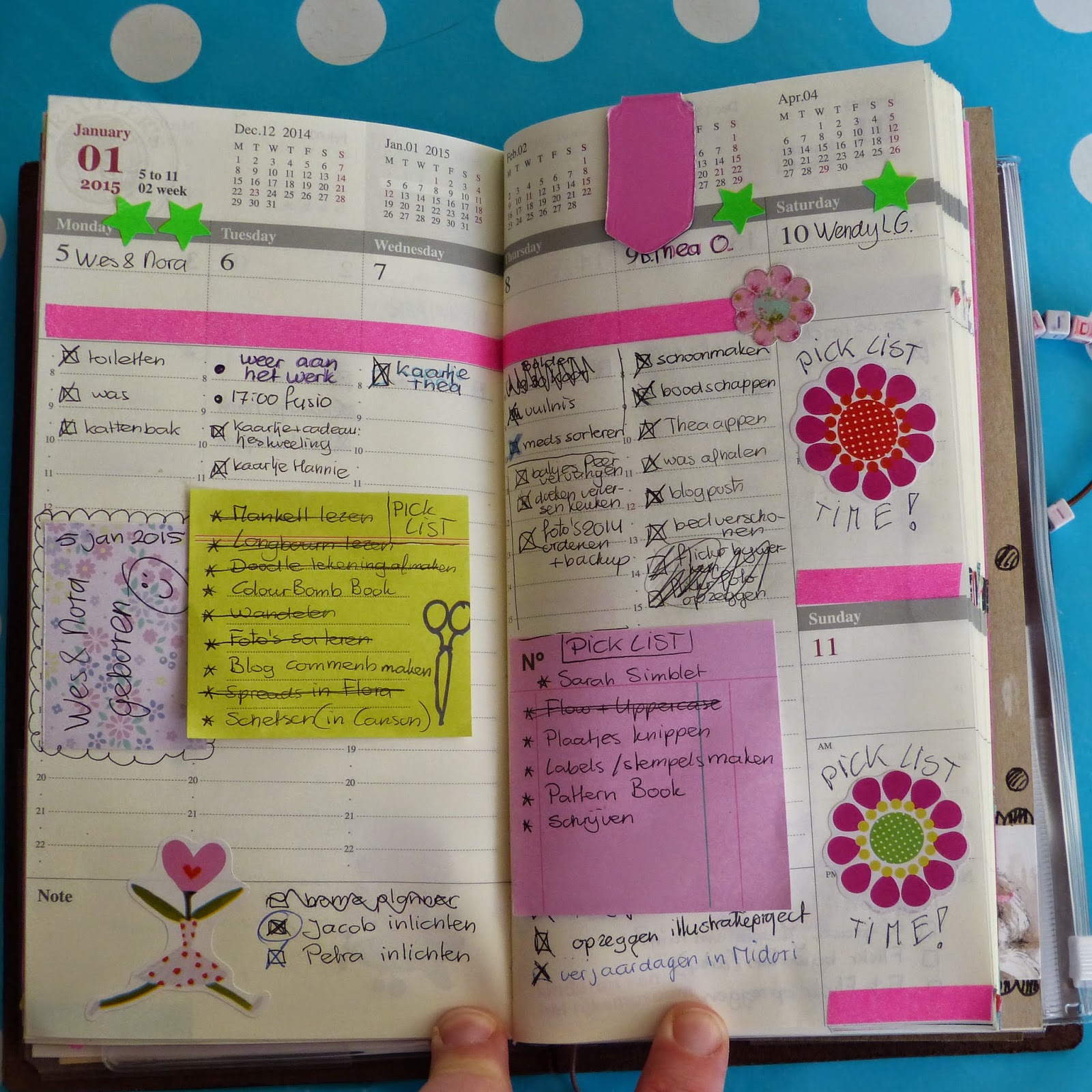 People have asked me what a pick list is, so I might as well explain it right now, before you have to ask me in the comments. I keep to do lists and pick lists. In a way the pick list is the antidote for the to do list. To do lists (which I hate, but which are necessary up to a point) are for chores and stuff that I have to do. Pick lists are something I invented for myself and basically hold the things I want to do or could do that week, but don't necessarily have to if I don't feel like it. The pick list is full of the good stuff. Artsy stuff, reading stuff, happy stuff! It's just to keep me a little focused, but it's emphatically not a to do list. It's a to choose list if you will. ;-)

Here's a picture of a spread that has not been used yet, just so you can get an idea of what the original booklet looks like. Well, the tape and stickers are added of course. I really like this weekly format. 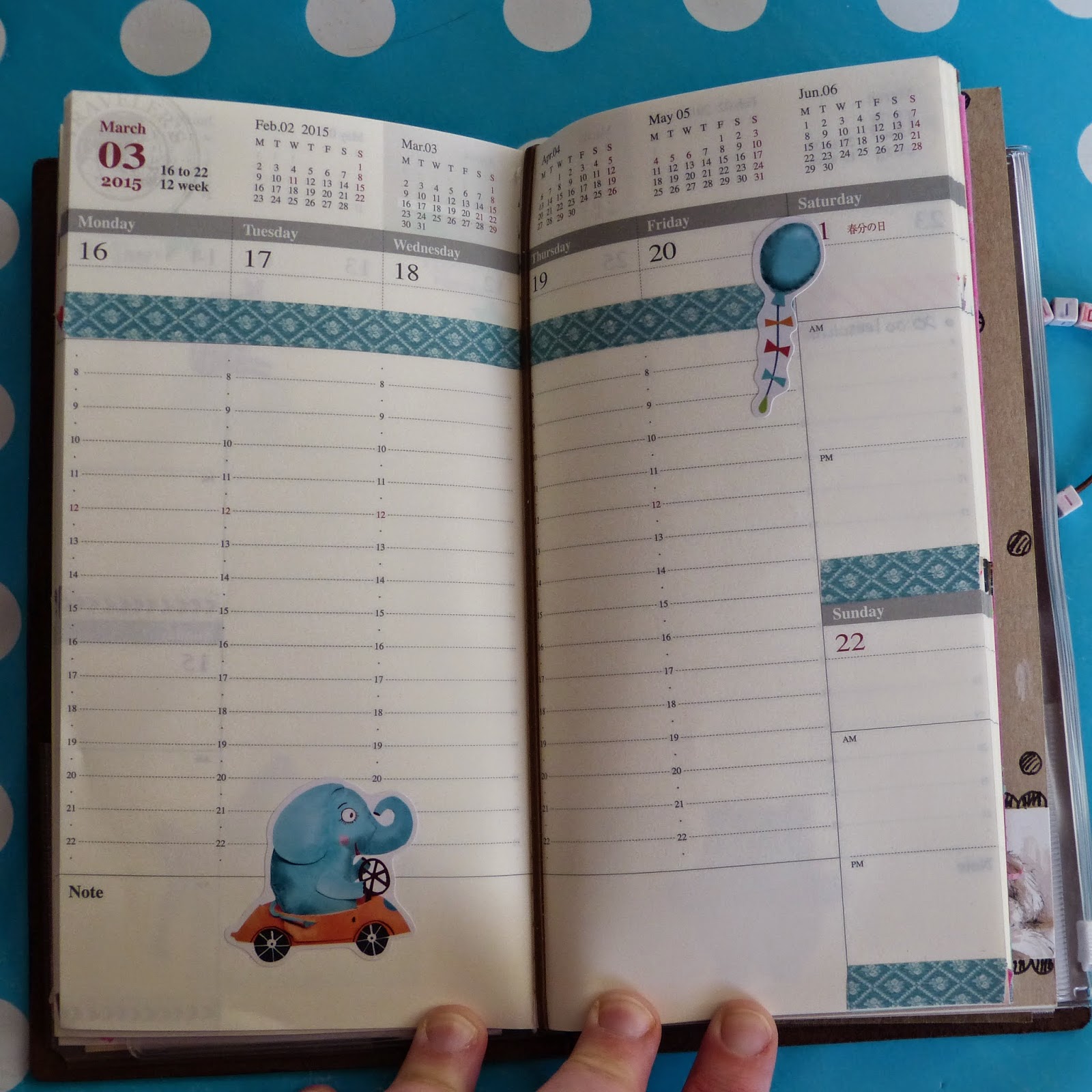 This is the inside back cover of the calendar. Of course I decorated that too. I like the 'done' sticker, it makes me smile to put it at the end of a calendar. ;-) 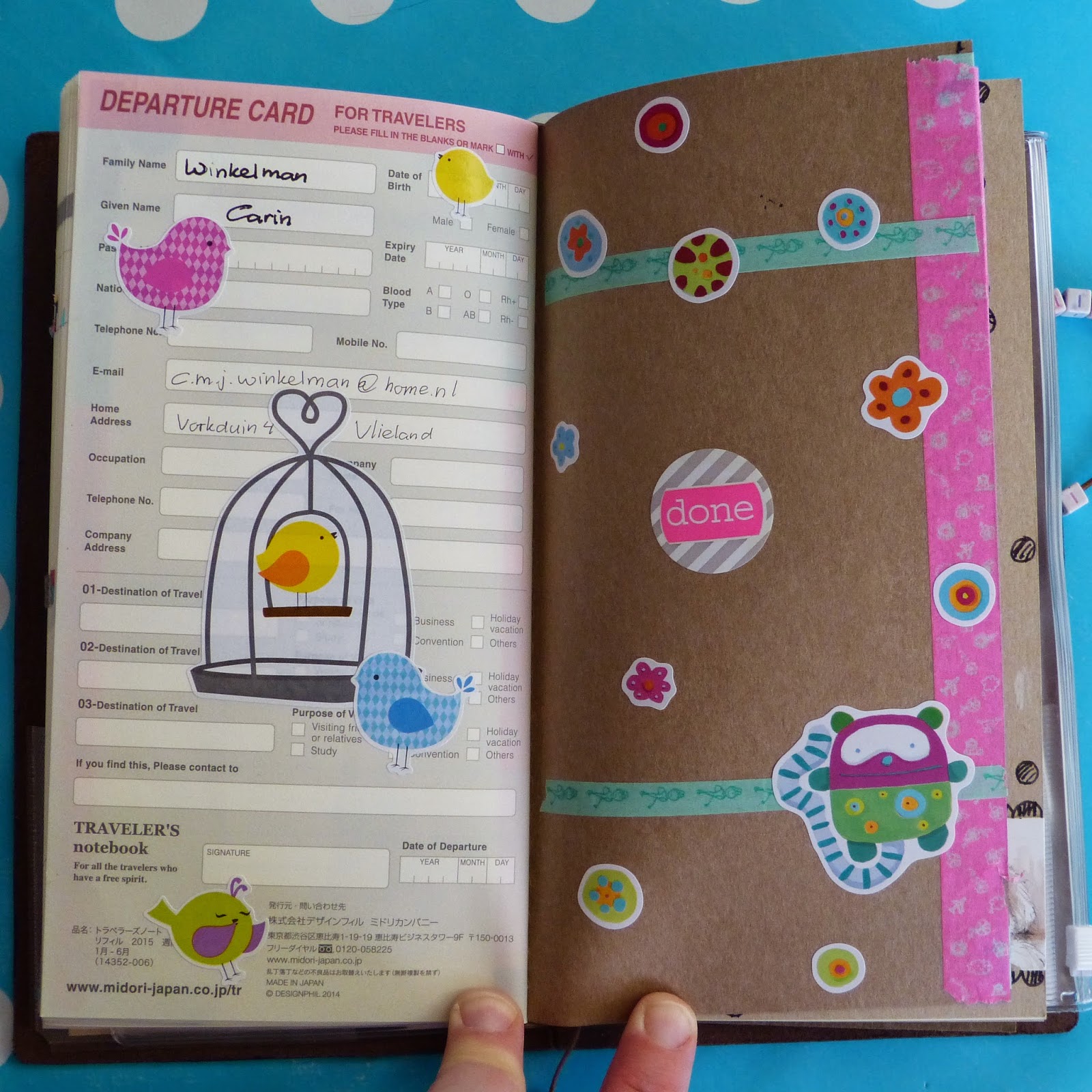 Then we move on to the second booklet/insert of my Midori, which is a quite beautiful kraft paper one. This one is intended for artsy stuff on the go. I decorated the outside cover of this one too. Naturally. 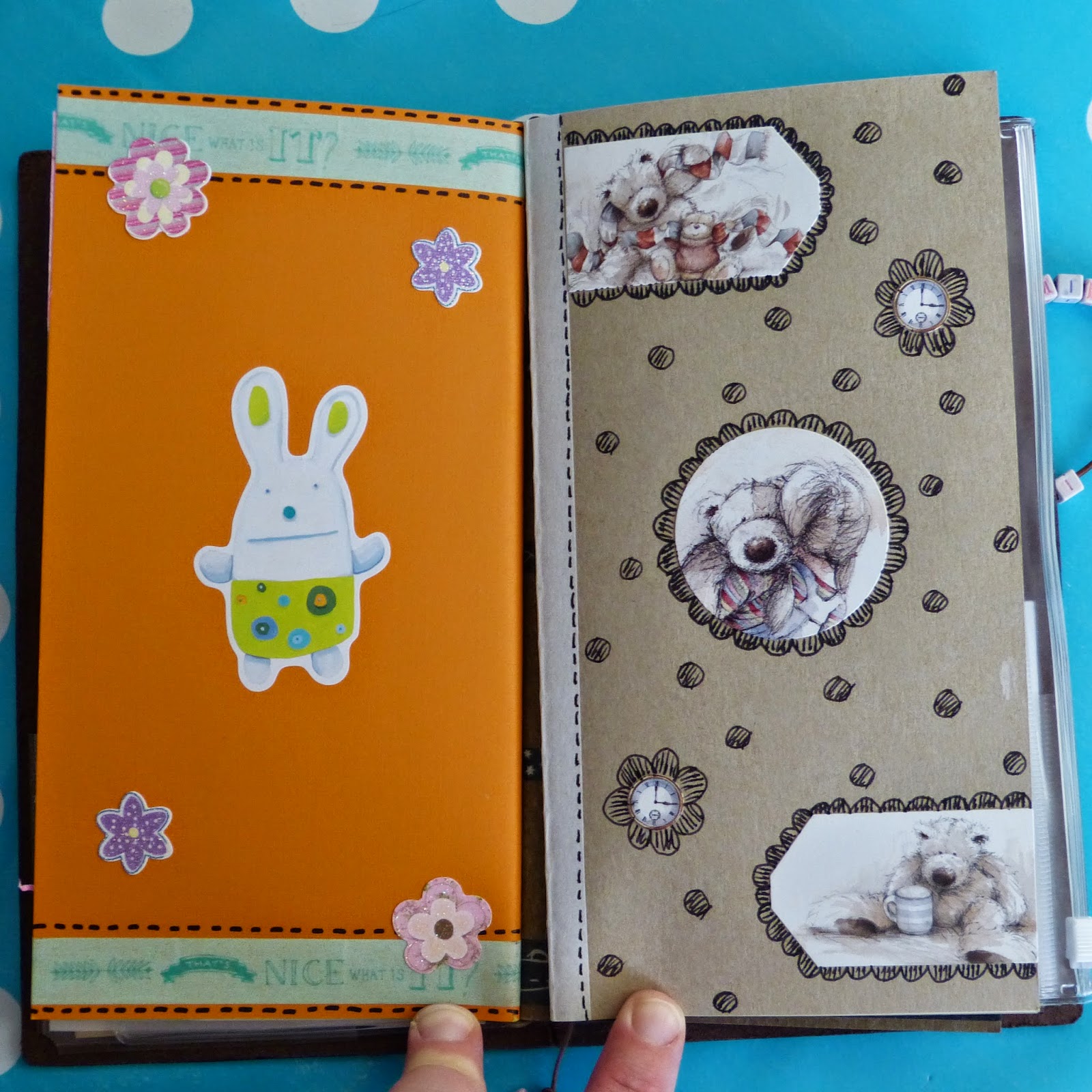 Because I just started using my Midori and only intend to work in the artsy segment when I'm away from home, I have not done much in this booklet yet. I did try out the paper with a drawing of some seed pods. 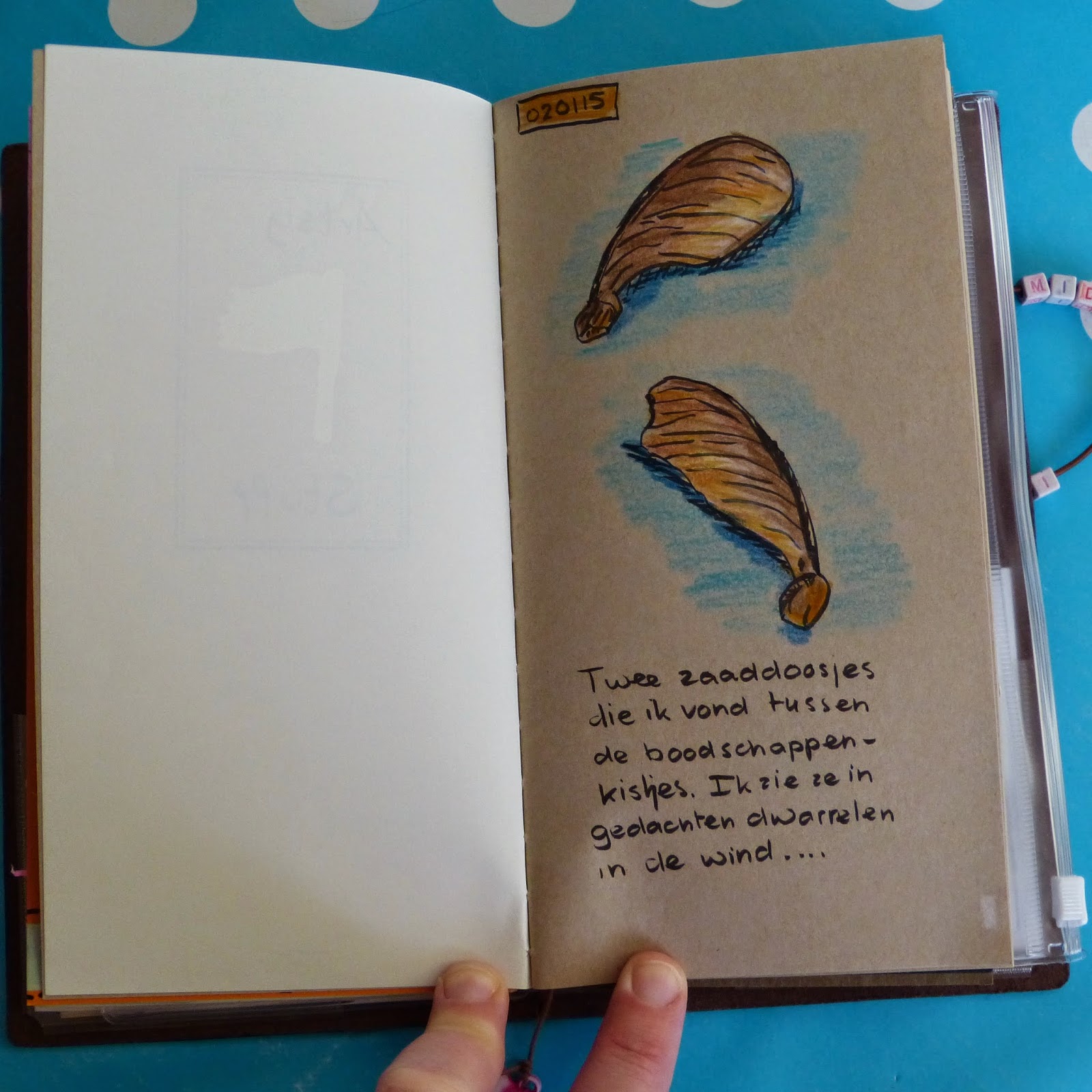 The third booklet/insert is one with grid paper. I really wanted a regular notebook in my Midori just to use as a brain dump, for lists and for anything that needs writing down on the spot. I decorated this section with kittens. Why? Because kittens are cute, why else! 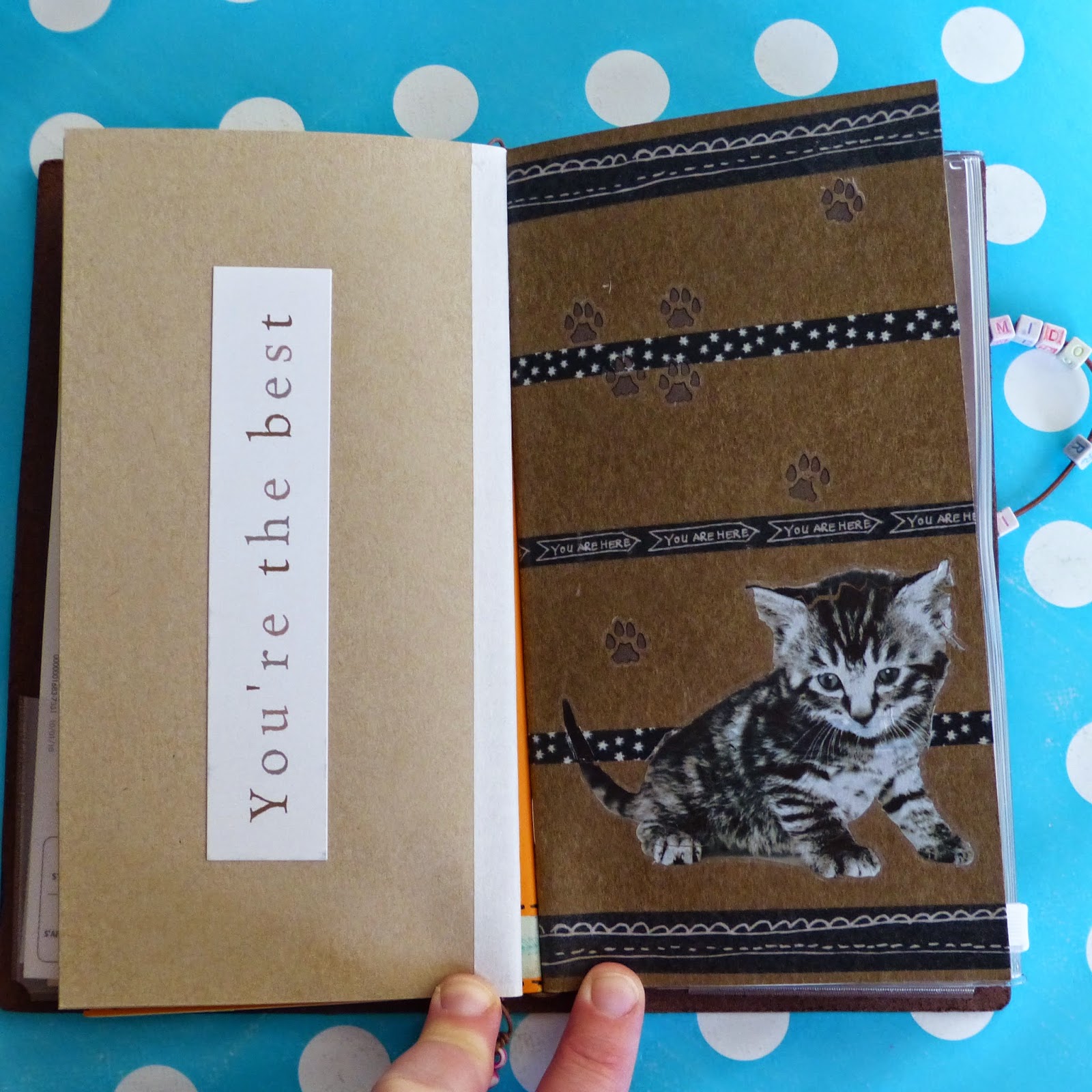 Every official Midori insert has this first page with a frame in it. I used it to write down what this insert is about. That kitten on the front walked right over it! 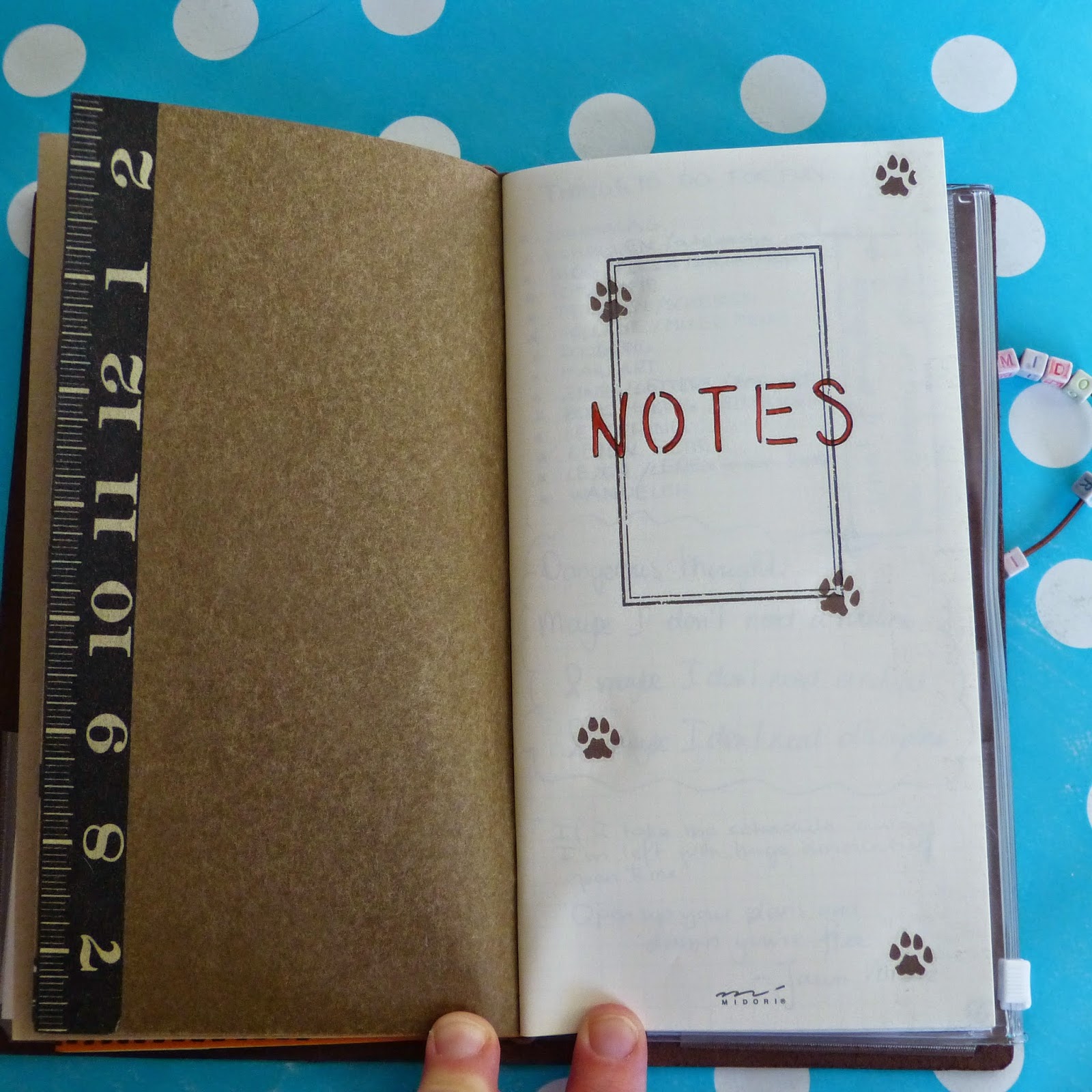 I have used the notebook several times already, but it's not really interesting to look at. Just notes, nothing visual, so not really picture worthy.

The back of the notebook has a kitten on it too. And here you can also see the other side of the zip lock insert, the part with the actual zip lock in it. In there I keep some post-its and a pen. I did buy a pen holder to go with the Midori, but I did not like it so I took it off and use this instead. 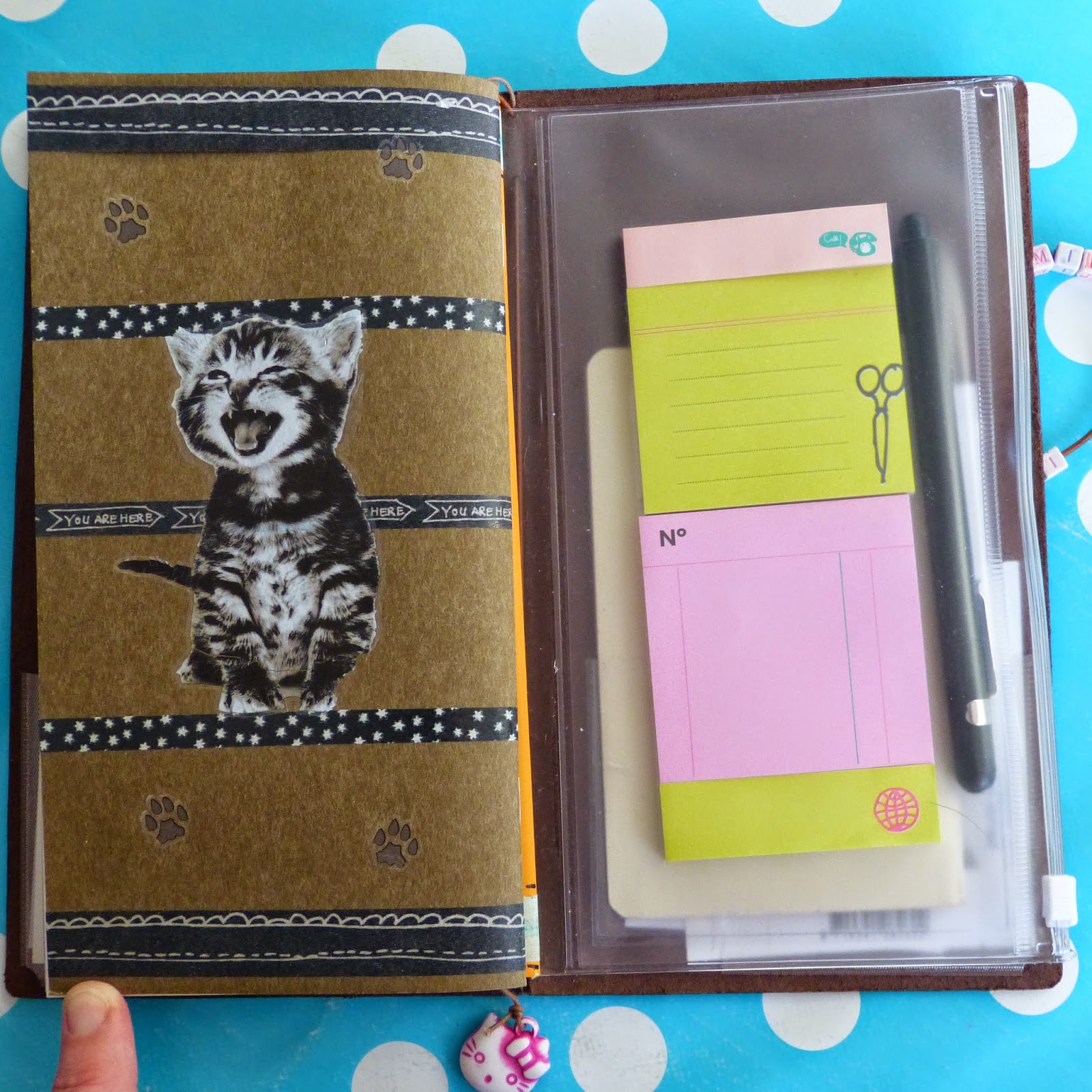 On the back of the ziplock insert I stuck another plastic thingy in which I put a little address book that originally came with a pocket moleskine calendar and has been in use for years already. It's really handy. And on the inside of the back I keep my stamps and receipts. 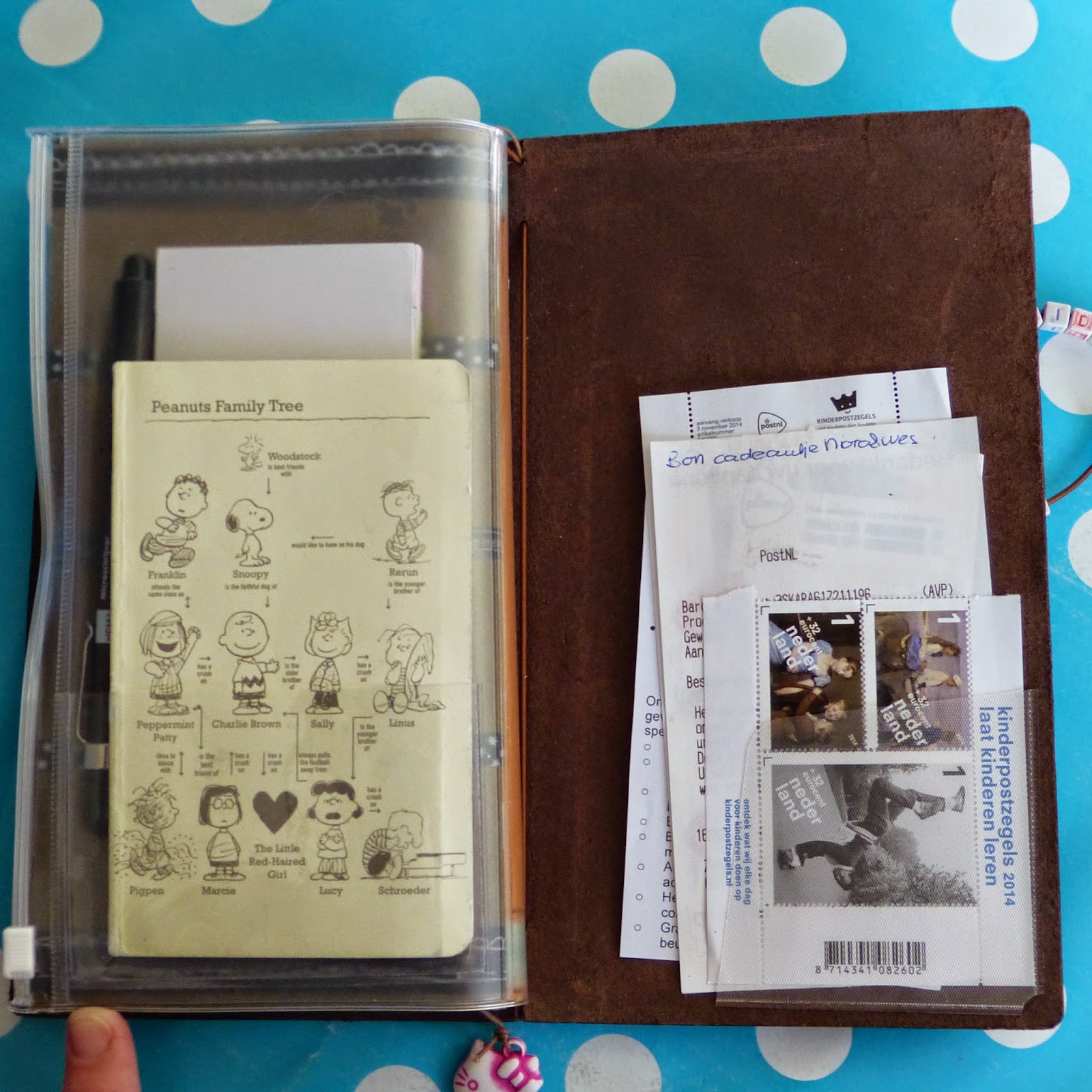 And that's it. My Midori Traveler's Notebook. I absolutely love it, it's so practical.

I have to warn you that it's pretty pricy too. It was my 'winter investment'. Every year I use a small part of my Christmas bonus to buy something I really want, but would normally not splurge so much on. Often it's special art supplies, but this year it was my Midori.

There's other versions of the Midori. They come in passport size too for instance. And there's a whole truckload of fauxdori makers on Etsy and elsewhere that can make them in any colour or size you like. I just happened to fall in love with the original (the leather is so beautiful), but I do intend to make my own inserts in the future. I have one made of doublesided scrapbook paper in mind for instance.

If you are curious about this notebook system go check out Google and YouTube. There's tons of information and video's on these things. Also there are several Facebook groups devoted to this notebook. When I went looking for info I was surprised there are whole communities devoted to different planners and notebooks. Who knew?  Anyway the ones I joined are Midori Traveler's Notebook Nederland (the Dutch group) and Midori Traveler's Notebook Resources (a very active international group).

I hope you liked this peek into my new love and I wish you all a wonderful and artsy day!