My new cat Spooky (new to me, he's adopted and three years old) has been with me for almost four months now and finally his personality is really starting to show. After a rocky start as scaredy cat and getting to know his new surroundings and me especially he is now really starting to blossom as a cat. It's a wonderful process to witness and I'm so glad I gave him the time to come around on his own and not force anything.

He's not a cat that follows me around all day, but when he's in the mood he is really affectionate and he loves to be petted from time to time. His favorite affectionate move is head butting my face over and over again. It makes me melt I have to tell you. :-)

The first months he didn't play at all, but in the last few weeks he seems to be finding his inner kitten again and is having so much fun with the toys I got him and that I was afraid he would never touch.

He's made a cat friend (also a black one, but with white socks) in the neighbourhood and watching them together is so adorable. They even have a mutual enemy and Spooky will come home from time to time with battle scars. He really is a street mongrel sometimes.

He goes outside almost every night and ever so once in a while will deem me good enough to keep me company on my bed, but in general outside nightly adventures are way more interesting. However when he is home for the night he loves to crawl all the way into the curve of my neck and its sounds like a hive of bees is sleeping next to my face for all the humming and buzzing he does.

When I'm home and relaxing during the day he often likes to lay beside me on the couch or sort of half on my lap like this: 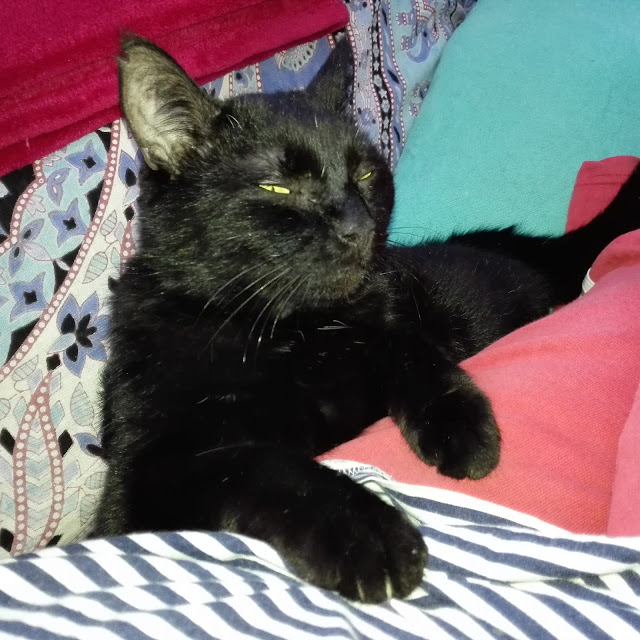 His body is mostly on the couch, but his front paws and his head or on me. That way I am in petting position. He especially likes doing that when I'm reading. 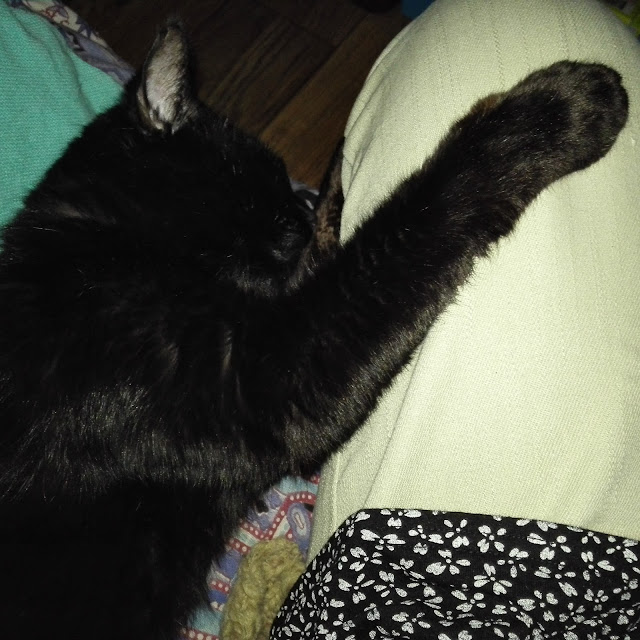 This makes me smile. It's the ultimate 'you're mine' gesture. :-)

And of course he is also starting to be a better (read 'more intrusive') assistant. He will often try to help me with my Morning Book or sit on my sketchbooks when I'm trying to take a  picture of them for my blog or Instagram/Facebook. That leads to situations like these:


After four months I think it's safe to say that Spooky has found his forever home and is very much enjoying it. I love him to death, maybe even more so because I really had to win his trust and affection. He still is scared of strange humans, I think that's never going to really stop, but that's okay with me as long as he seems healthy and happy and trusts me enough to get in my way, haha.

As a matter of fact, if you find strange typos in this post it's because he walked across the keyboard of my laptop at least six times since I started typing, one time even making this post disappear and me worried that I had lost the whole thing (luckily blogger autosaves everything). That's a truly  dedicated assistant for you!