Good times were had last weekend

Good times were had the past weekend. Of course for me weekends are long and shouldn't really be called weekends. But I can't seem to stop doing that anyway. I'm off work every Friday to Monday since I started working less.

I spent most of Friday in the studio playing, among other things, with my masking liquid markers: 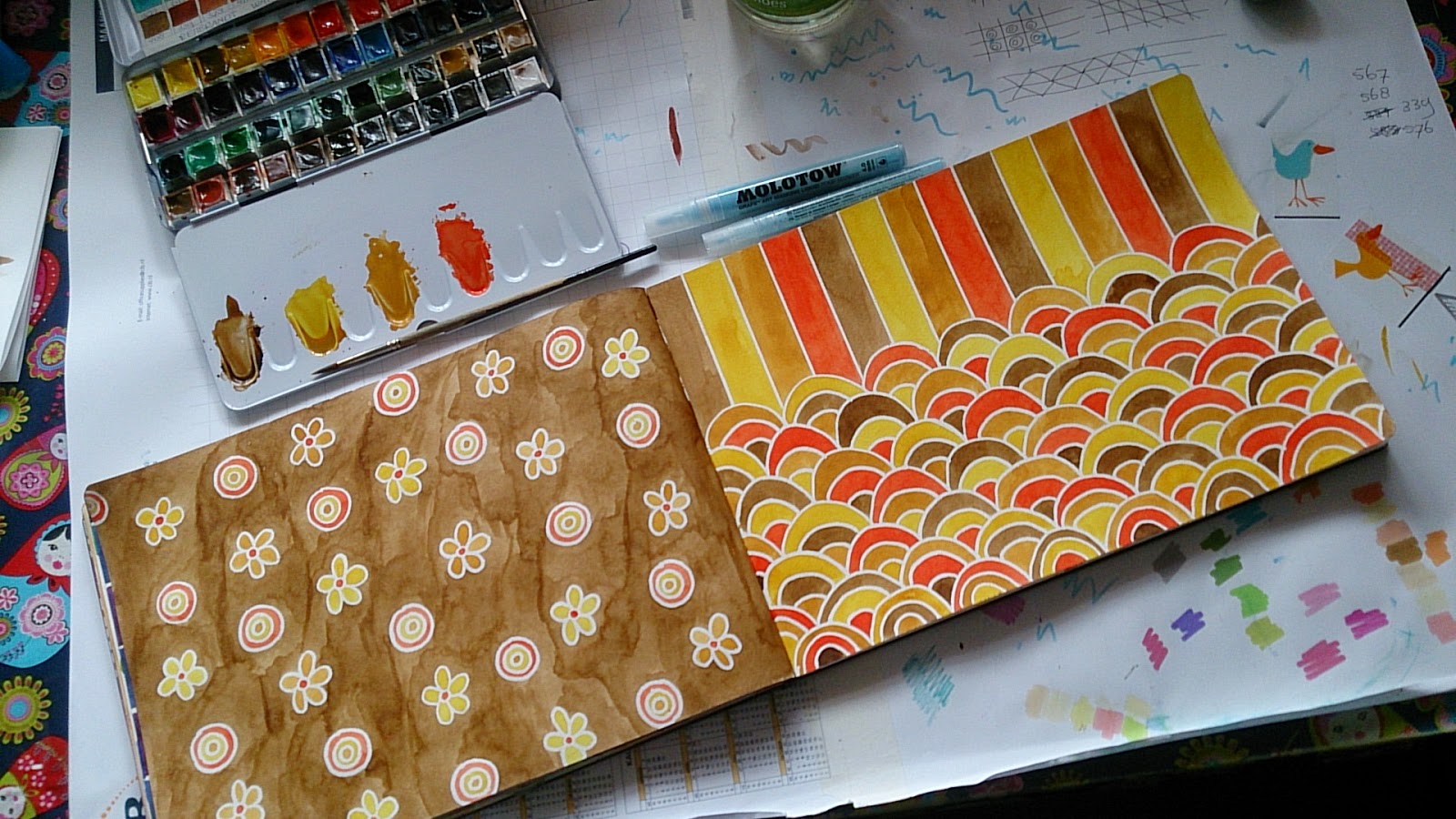 This weekend it was time for the annual ITGWO festival. ITGWO stands for Into The Great Wide Open and is a very popular music and arts festival that is spread out over several places on the island. It lasts for about three and a half days, but that's a bit too much for me, so I went for one. As islanders you can get day tickets, so that helps. 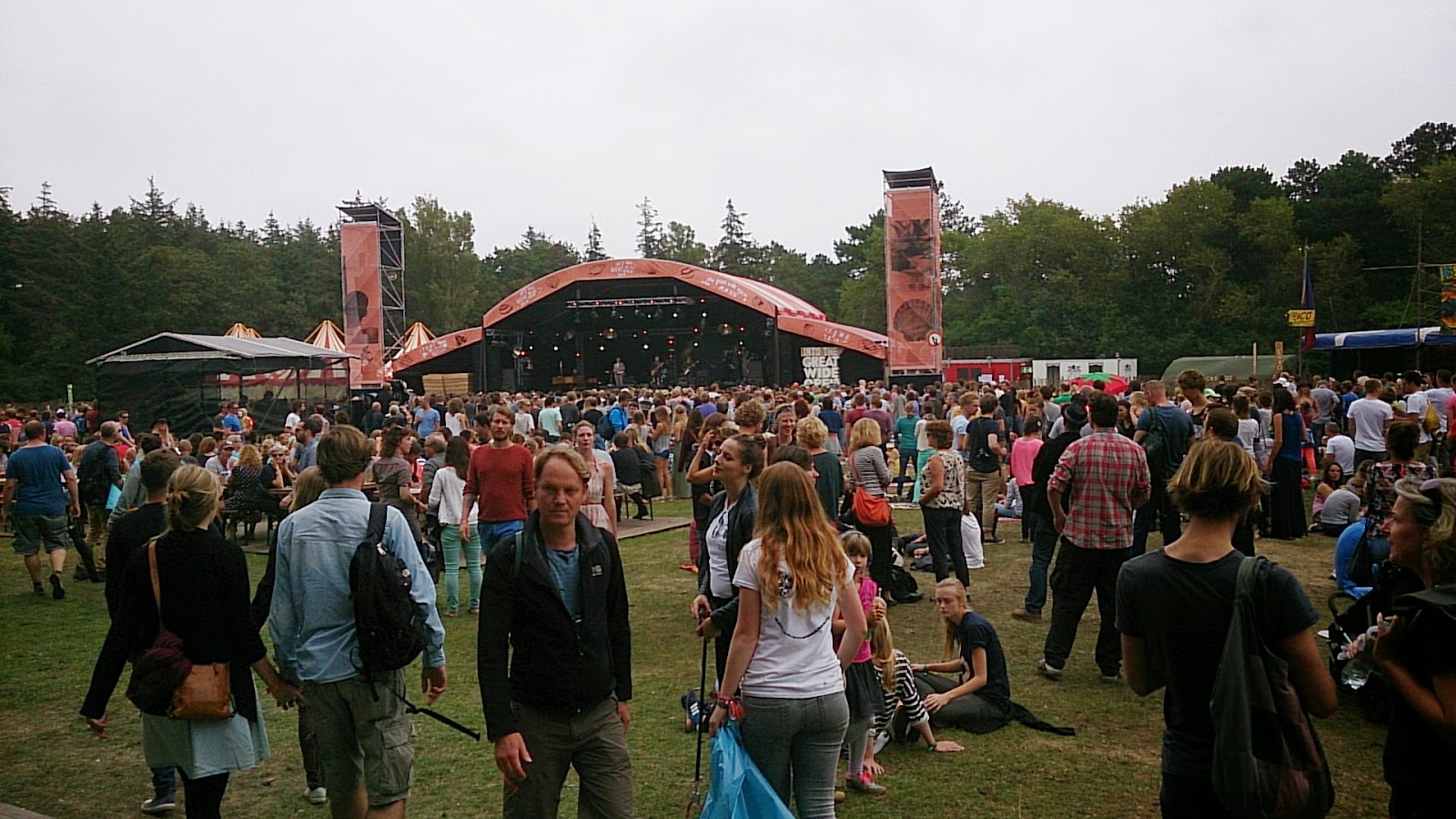 The stages are set out in the middle of nature. One was in the dunes for instance and another (below) was in the middle of the forest. Everyone sat down there and the atmosphere is beyond words.  Thousands of people come to the festival every year and when the tickets sell they are usually sold out within minutes. Luckily as an islander you can always get tickets and at a discount too! Islander privilege! ;-) 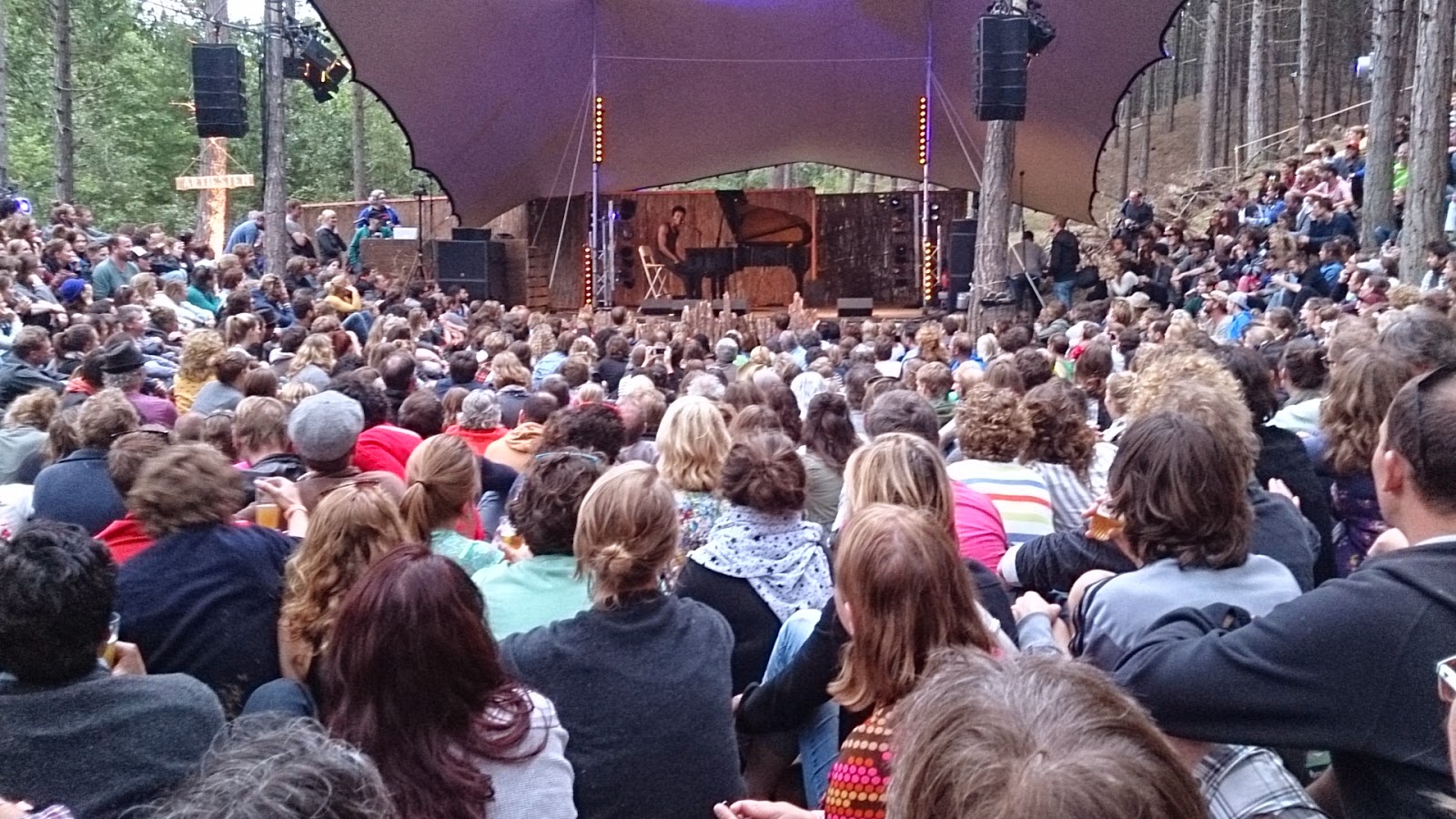 I saw several very good (and less good) performers play like Kris Berry & Requisite (a woman with a voice like an angel, I even bought a cd), The Kik (fun fun fun), Benjamin Clementine (a bit odd, but he grows on you) several others, but the reason I got the ticket for Saturday was Ben Howard. He was still quite unknown when he was here last time several years ago and he blew the entire audience away in a small performance hall near the camp site. Now he had center stage and an entire band, was a main act for the evening and people actually could sing along with his songs. I guess he has moved up in the music world. I still missed the magic of that performance from years ago though. That was something really special. 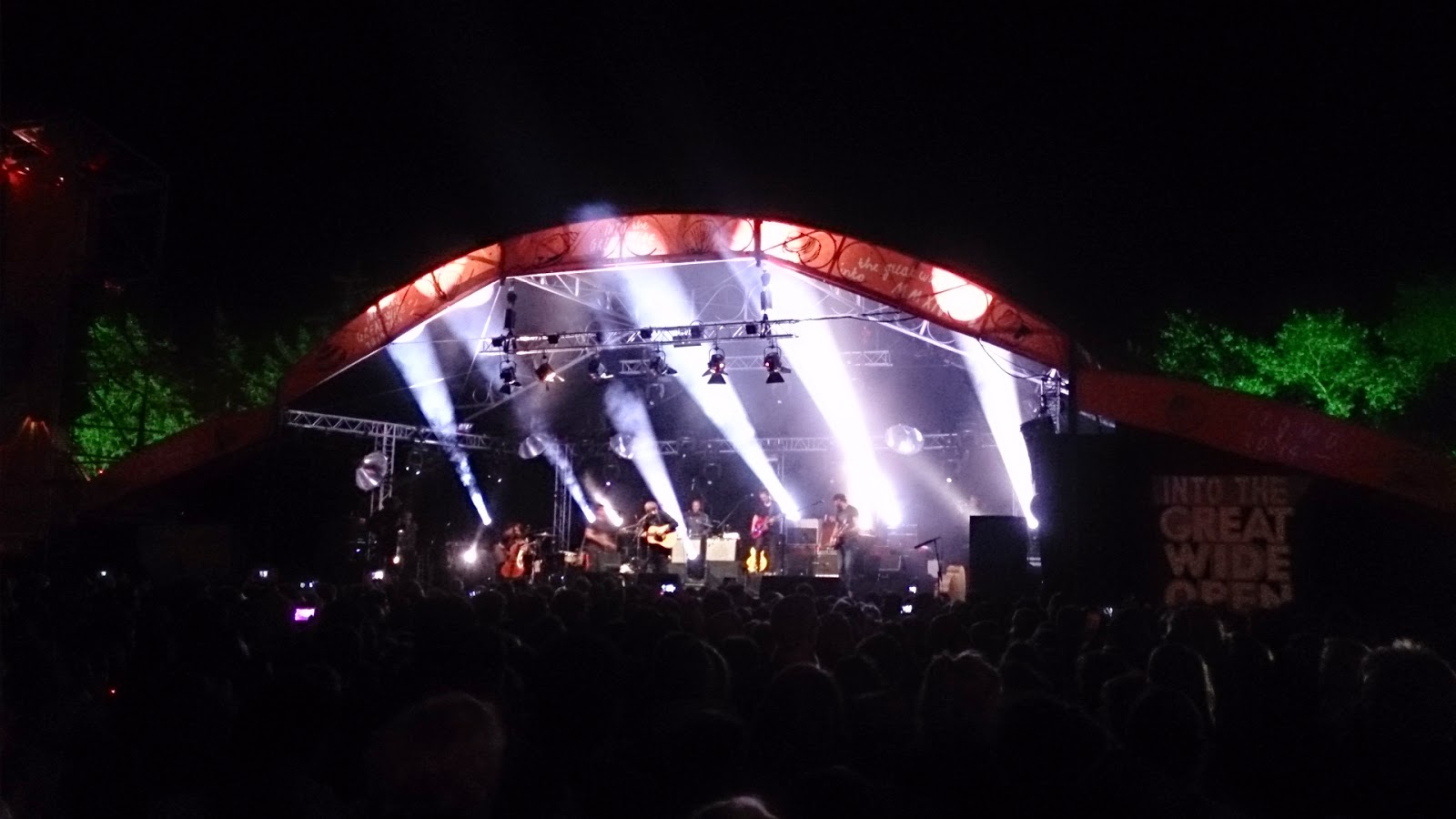 After all that walking around from stage to stage and standing for hours on end among crowds of people I really needed some serious down time.On Sunday I spent the day mostly napping and reading at home, but on Monday it was time to get out and about again.

I walked through the forest and dunes and then I decided to climb the dunes that lead to the North Sea and found myself a perfect spot on a sandy plateau right here: 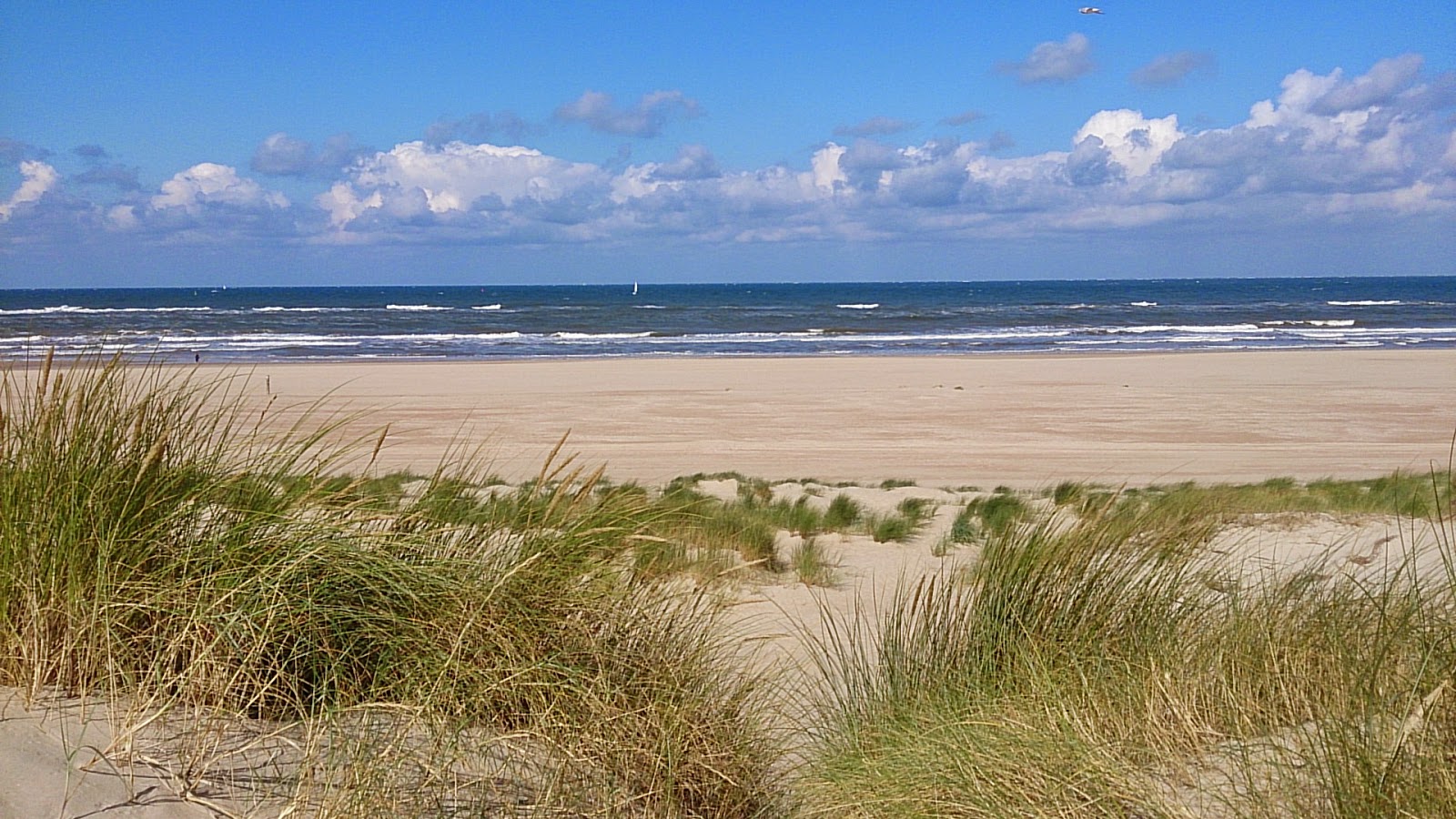 It looks lower than it was. I was about halfway up a dune. It was one of those white clouds blue sky days with lots of sun and a nice fresh wind (it had been pretty windless the days before which is unusual for us). I brought a book and a sjawl to lay down on. I napped, I read, I stared into the distance and repeated this a couple of times until some time later I discovered four hours had passed!
It was one of those perfect afternoons that just kind of happen.

When I got home and had showered the sand off I was more relaxed than I had been in years and that is saying something. It's like my whole body let go of everything. It was wonderful wonderful wonderful (yes, I had to say that three times).

That night I closed off the weekend with a few hours at the journaling table. 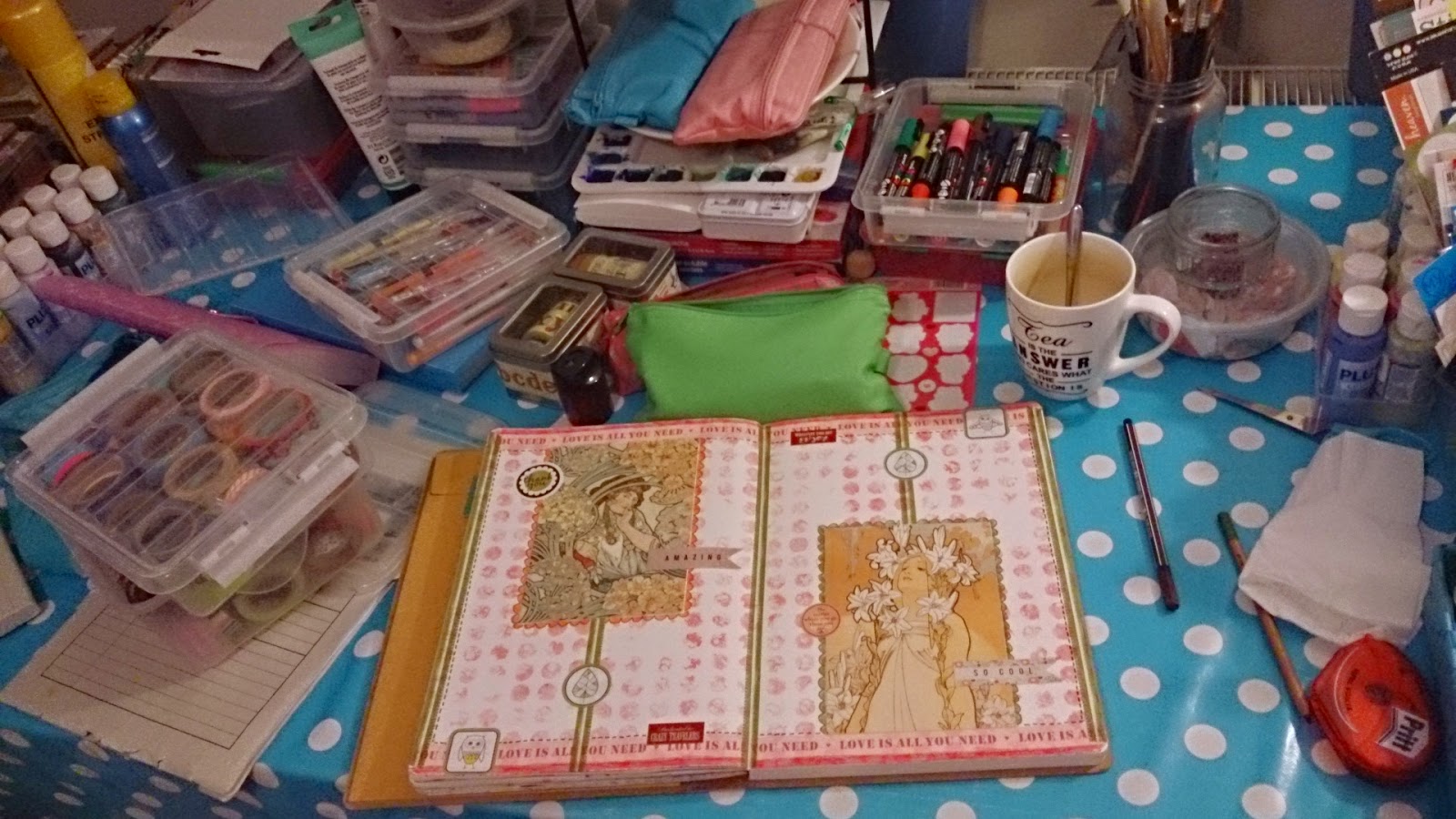 I wish I could be that relaxed all the time, but my personality won't allow it. I'm doing my best though, haha. In any case it was one of those weekends that is just good for the soul, especially those hours at the beach.

In the meantime some work days at the office have passed and now a new weekend has begun for me. Let's hope it's another wonderful and artsy one and I wish you all the same: good weekend all!