But recently some things just came together to make this year different.
And wouldn't you know it? I thought off all this stuff right along the time that IFJM was about to start. And guess what the theme of this year is? NO EXPLANATIONS! I kid you not! Apparently the journal gods were conspiring against me (or is it for me?). I had not choice. I had to join!

You can read all about IFJM on the IFJM-blog. Do read the introduction posts to get a good idea about what it is. The general idea is that you pretend to be another person and journal as that person would do. It's a way to get out of your comfort zone, try new approaches and techniques and basically have a lot of fun!

Although Roz suggests to keep the fake journal next to your real one I knew I wouldn't be able to do that, so I decided to focus my artistic practice this April solely on the fake journal. That way I could really get into it and wouldn't be distracted by other things. To do this I made sure that my fake persona is reasonably close to me, but has a couple of traits that I would like to develop more in myself. I took some notes in my impromptu journal about what I had in mind. Feel free to read them to see what my alter ego is all about. It saves me a lot of time typing it all down. ;-) 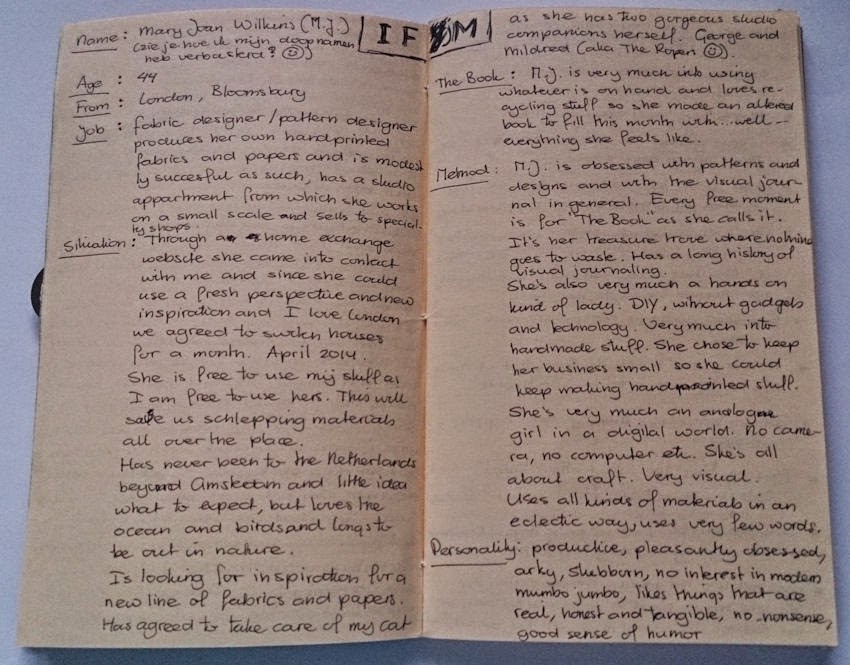 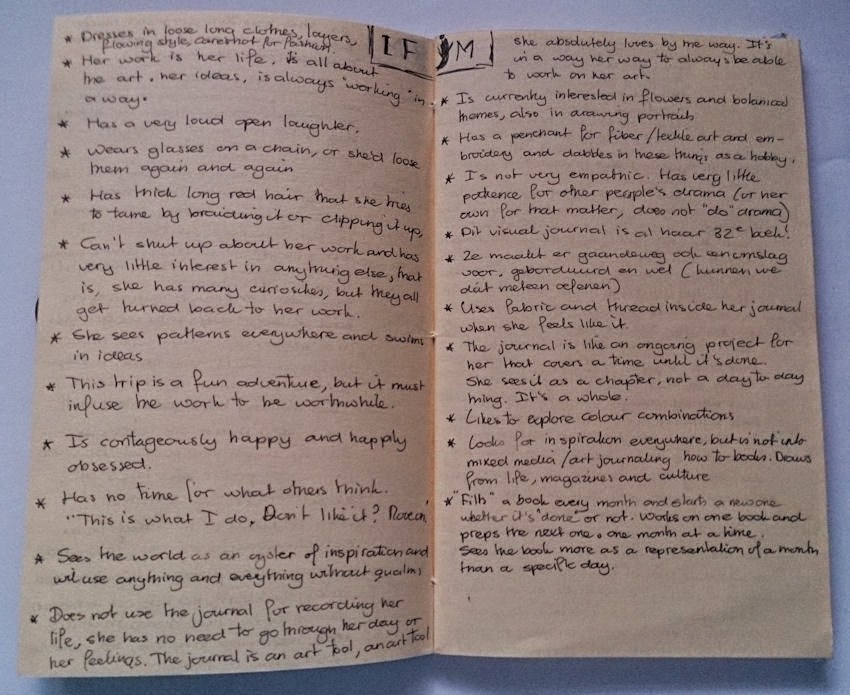 Basically my fake person is a maker of handprinted fabrics and papers who lives in London but through a home exchange site is staying in my house for a month to recharge and get some new inspiration. She's an experienced visual journaler who has no interest in writing about her life or writing in general or having  journal that is an account of her life. Her name is MJ Wilkins. MJ stands for Mary Joan, which is an adaptation of my second and third name (Maria Johanna).

The above notes are just my initial thoughts that came into my head when I started thinking about all this. I have no idea if all of it will show in the actual journal, but that's not the point anyway. The point is to fill a book the way MJ would do it, with complete disregard for things like chronology, explanations or even finishing a spread. To her it's all about the process and the handling of materials.

For my book for this project I chose the altered book I was going to use as my next journal. I finished it just in time before April. 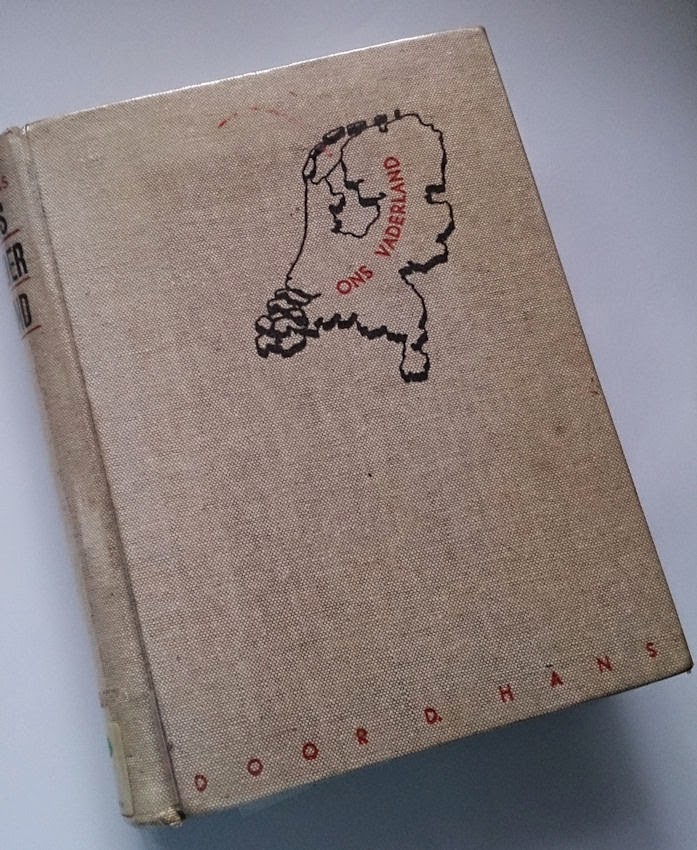 It's an old library book I got at a thrift store. It's from the 1930's and it's a very nationalistic book about the Netherlands called "Ons Vaderland" (Our Fatherland), full of proud facts and reflections. I found it a bit creepy actually, haha.

I bought it because it had a ton of luscious black and white pictures, beautiful printed paper and was a nice size to make journal out of.

To prep it I took out all the picture pages (those can be used for collage)  and some of the text pages until about half of the book was left. Then I gesso'd the pages and filled them with gouache washes to give it some colour. I also added some tabs. Here's how it looks now: 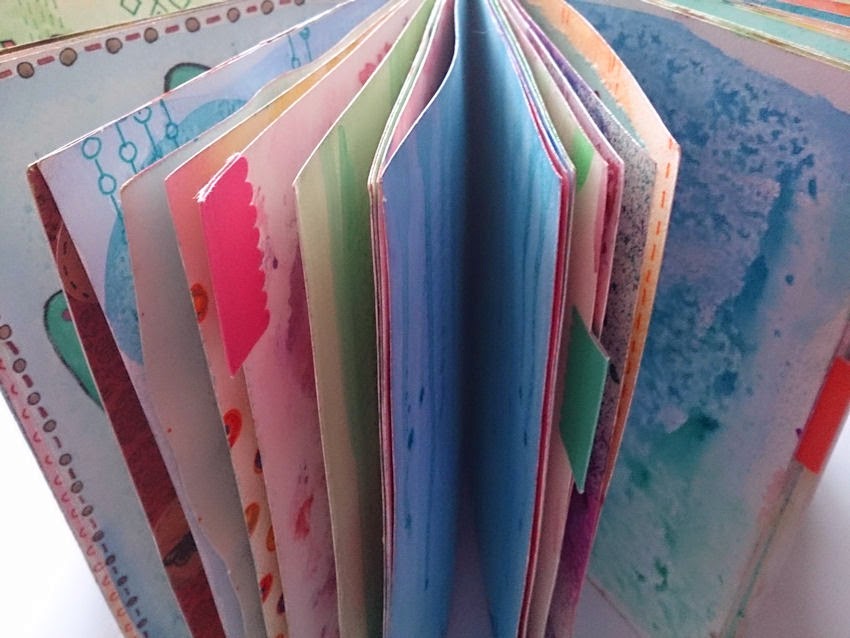 And here are some examples of the spreads with the gouache on them. A couple have some ink on them too. 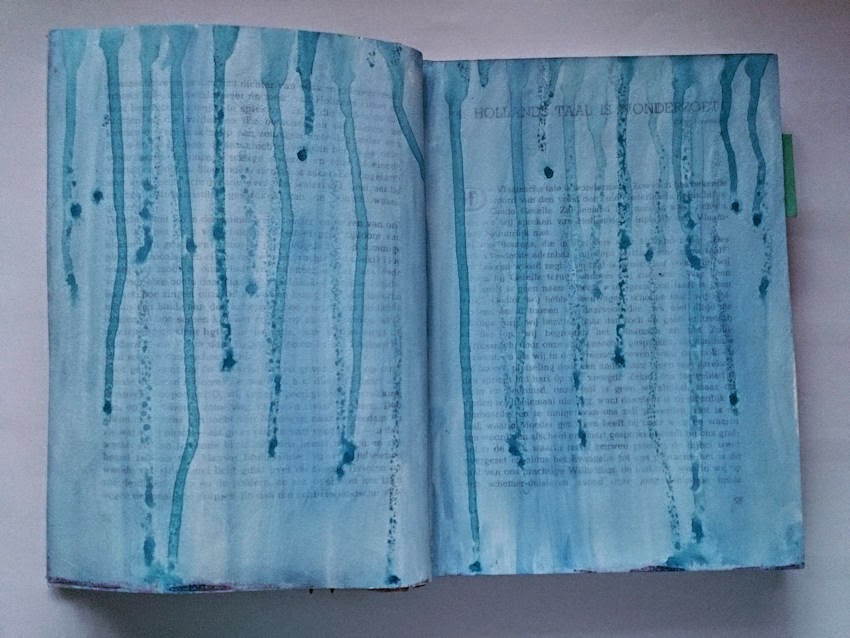 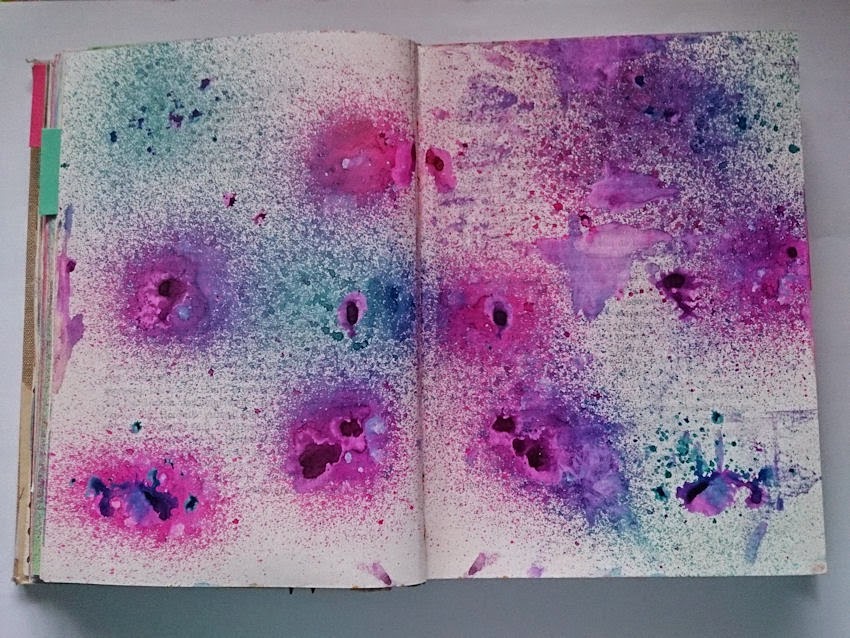 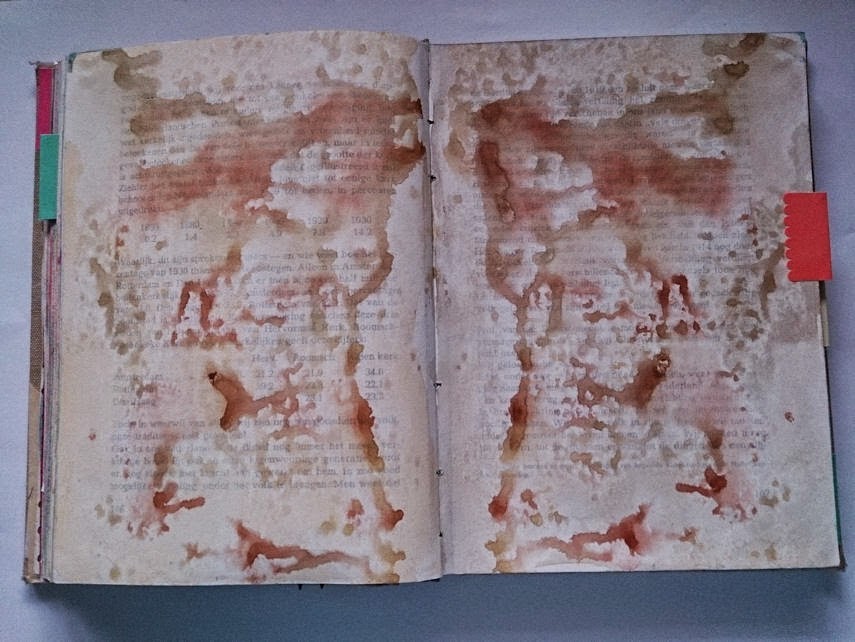 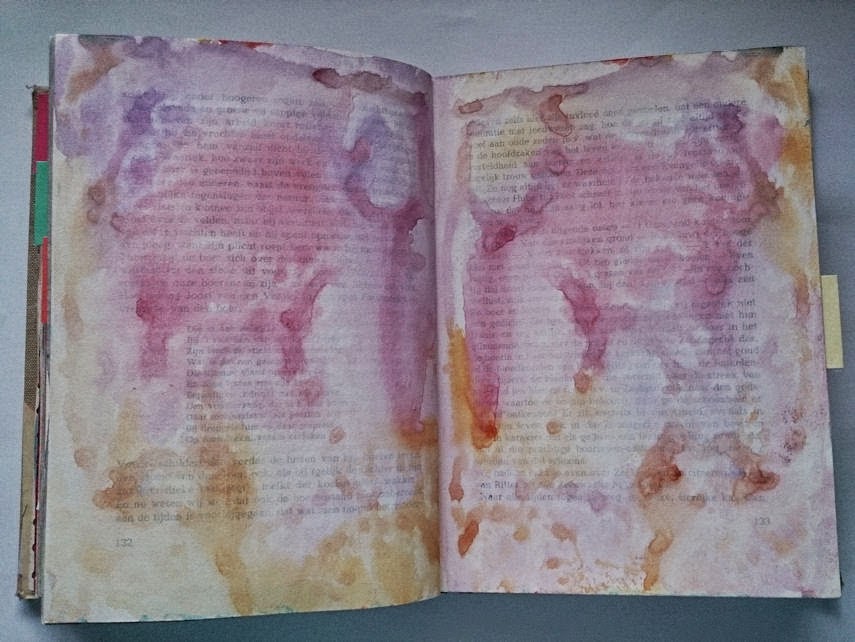 I really like how the book turned out. It's nice and messy, so there's no way this will ever be turned into a pretty perfect journal.
I intend to make a fabric cover for the journal, because that's something that MJ would do and because it's something I want to dabble in more myself. It's not done yet, but I have a general idea of what it's going to look like. Here are some notes on that from my Studio Book: 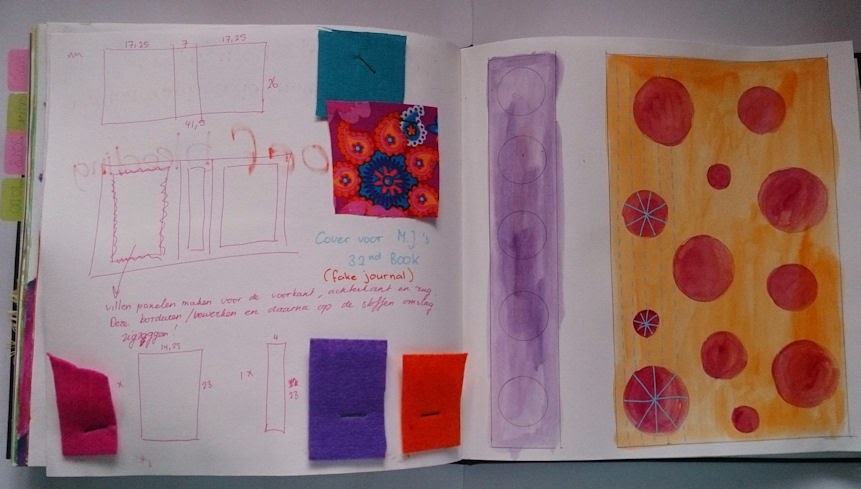 ﻿The cover will be machine sewn with blue and flowered fabric, but it will have patches of felt that have embroidery on them with crochet yarn. I have actually started the embroidery already. Here's the current state of affairs on the cover: 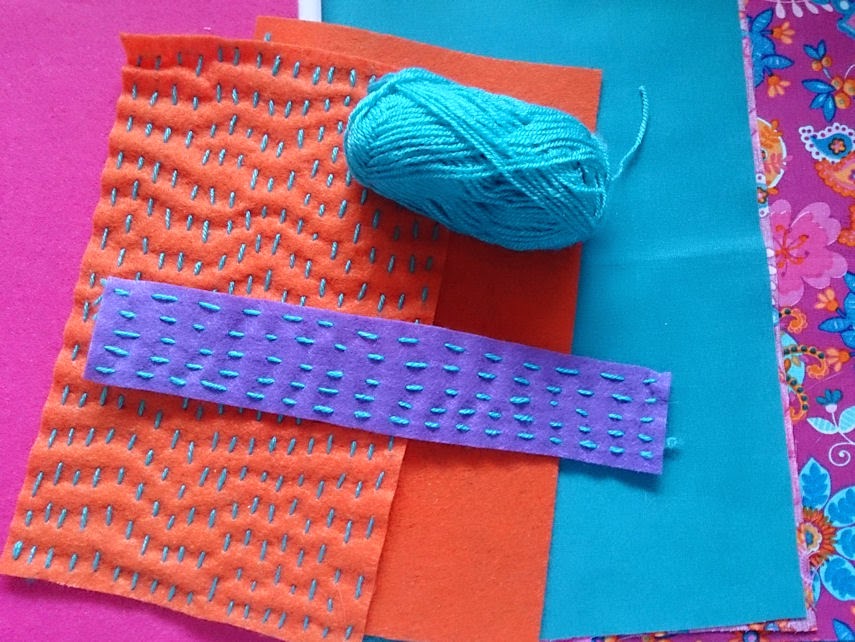 Aren't those colours just luscious? The pink felt on the left will be cut into circles which will be hand embroidered on the the orange and purple patches of felt. I'm having a lot of fun with it.

In fact I'm having a lot of fun with the entire journal! I have been working in it for a week now (I started early to warm up a little) and I must say it is doing exactly what I wanted it to do. It's opening me up a whole new way of working. MJ is becoming my hero, which is good, 'cause in the end she's just me, haha.

I will show you some of the spreads I've done so far in my next post. I have a lot to say about the way things are going, but I will refrain from it until the month is over and do a bit of a reflection on it in May. Just know that April will pretty much be all about this fake journal and very little else (except for my birthday next week which will have it's traditional birthday giveaway, yay!). I hope you will enjoy going through this experiment with me and maybe you would like to join in. It's not too late. Just visit the IFJM blog and see if it's something you would like to try.

Have a wonderful Sunday all!

PS: for those visiting through Roz' IFJM blog: all the posts concerning the fake journal will have the label 'fake journal' attached to it. You can just click the label in the label list on the sidebar.
Geplaatst door Carin Winkelman op April 06, 2014
Email ThisBlogThis!Share to TwitterShare to FacebookShare to Pinterest
Labels: altered book, art journal, book making, fake journal
Newer Post Older Post Home