A new assistant in the making

As you all know I lost my lovely furry assistant Peer last August and he is still sorely missed.

I took my time before I started looking for another cat both for emotional and practical reasons, but for the past month or so I have actively been searching and I found this black beauty:

This is Spooky. Spooky is three years old and has always lived with the same person/family. The family split up because of divorce and the owner had less and less time to spend on him so decided he would be better off in another home. That home is mine, obviously.

I think it's because it's been such smooth sailing for Spooky until now that he is well....totally spooked! I picked him up three days ago and the first two days I didn't even get to see his handsome face, he was just that scared. It's totally understandable from his point of view. He was ripped away from his home, put in a travel basket, then moved into another travel basket by a complete stranger, then this creepy stranger took him on a ferry in stormy weather (a bumpy ride) and just expected him to live in her even stranger house. Spooky was not amused and he still isn't.

He has pretty much hidden in a corner in my little shed (which is attached to my living room, so he can just get into that as well) and mostly finds me the scariest person ever and this house the most horrible ever. I feel so so bad for him.

Now here's the weird thing. Last night, after I came back from work I managed to seduce him. And I don't mean that in a shy way either. He totally transformed from scaredy cat to what I assume is his actual nature, a cat that just loves loves loves to cuddle and be with you. Lookit: 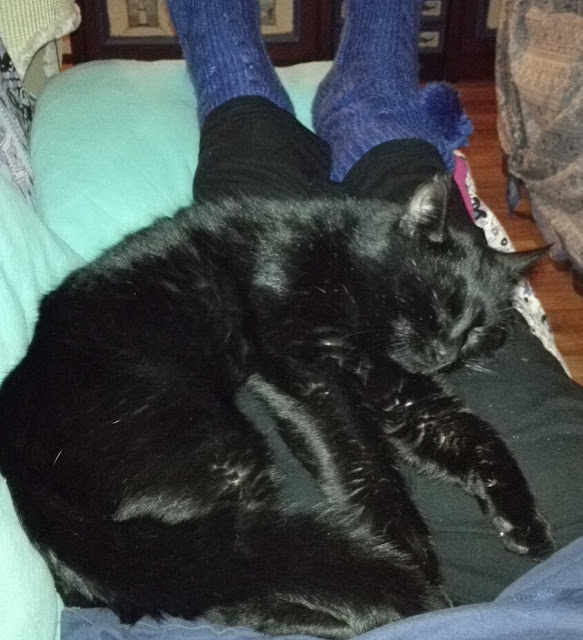 I swear I spent the entire night with my mouth open in total amazement that this frightened boy had such sweetness in him. I mean I knew in essence he was a pretty social family cat, but I didn't know he could be this adorable.

I'm not sure what turned the switch in his head last night, but whatever did turned it off again as well, because while this morning he was still (after a little seduction) very sweet and even stroked my face with his (I died when that happened!) right now he is hiding again in the shed and doesn't want anything to do with me.

It's not that there has otherwise been no progress at all, he does dare to get his food from the kitchen with me in the room for instance, an unthinkable thing two days ago, but it is slow going and it makes me so sad, because now I know what cat lies under the surface and I wish I could explain to him that there really is no need to be scared of me. I raised the most spoiled cats in the universe for god's sake!

But cats will be cats and you cannot force them. It would only make things worse. I think the problem is that he loves food and he loves to cuddle and he really misses that right now, but he doesn't trust me or the home he now lives in and he somehow can't combine the two yet in his system. This takes time. I don't know if last night was a fluke, but if it was it was a wonderful one. This seems to be one of those cases of 10 steps forward, 9 steps back. I must be patient.

I'm not used to this at all. So far all my cats have been superrelaxed and easygoing, so this is going to be a challenge. I think it will be worth it though going by what I saw last night.

Anyway, as you may guess my energy and focus are all on Spooky right now (or The Spook as I like to call him) and I will not be blogging for a few days. I'm sure you understand.

As soon as things settle down just a little I'll be back. I'll keep you posted!

Also if you have any suggestions or tips for winning his trust a little I would surely appreciate them.

Wishing you all a wonderful and artsy weekend, I am about to have a spooky one! ;-)
Geplaatst door Carin Winkelman op March 04, 2016
Email ThisBlogThis!Share to TwitterShare to FacebookShare to Pinterest
Labels: cats
Newer Post Older Post Home